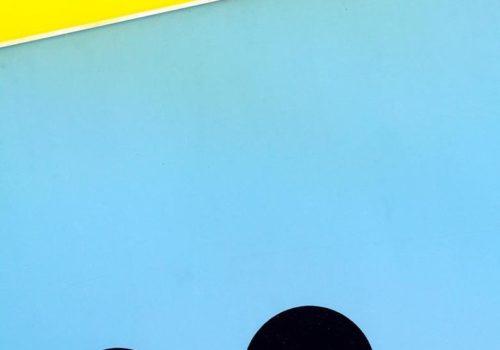 Although Anikó is strongly situated in the medium of photography, her work correlates with other fine art practices such as painting and printmaking. We can compare her to certain 20th century styles because of their formalist manifestations, such as minimalism, constructivism, and suprematism, all of which deviate from realistic representations in art. Her characteristic approach to photography therefore highlights formalist bare images steeped in both the rich tradition of modernism and contemporary art practices.

The photographs in the series Coloured Surfaces are characterised by geometric shapes and bright colours. At first glance they look like hard-edge paintings, but they were taken in real places and their sources are modern and contemporary architecture. I am concerned with the sense of space and proportion between the chosen detail and the original, and also with the relationship between them. Since a three-dimensional object cannot be condensed into a single two-dimensional image, by influencing perception through highlighting elements, changing proportions and point of view, I aim to make the details in the photograph feel spatial.

Anikó Robitz (1978, Nagykanizsa, Hungary) studied photography at Szellemkép Photography School until 2006 and then continued her studies at Milton Friedman University in Budapest (2008-2011). She received the Graz Cultural City Network Award scholarship in 2008 and the Pécsi József scholarship in 2009. She lives and works in Budapest.

Photon Gallery (Vienna, Ljubljana)
Photon Gallery was founded to represent and promote photographic artists from Central and South-Eastern Europe. The gallery exhibits work by both established and young, emerging photographers. It frequently collaborates with many of the leading photographic institutions, galleries and festivals in Europe and annually participates in various international art fairs, especially those specialized in photography. The gallery cooperates with Art Market Budapest, a leading regional fair, where Photon acts in a partner role in organizing a parallel Art Photo Budapest fair. In addition to operating the premises of the Centre for Contemporary Photography in Ljubljana, Photon expanded its activities abroad in 2013 and opened a gallery space in Vienna city centre.