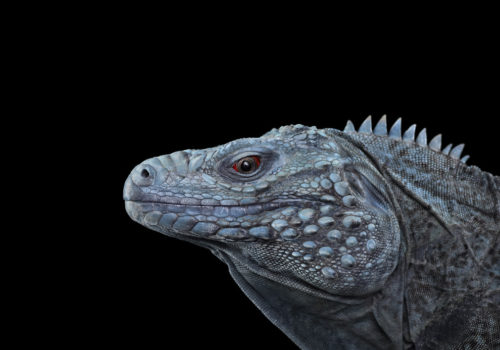 Animal subjects practically jump off of the page in luminous detail, with each individuating trait articulated with a sharpness that usually feels reserved for the world of high fashion. Wilson’s technical eye and artistic sensitivity allows for the viewer to have a direct confrontation with the beauty contained within every bird, cat, animal and reptile that he photographs. Through the lens of the endangered, the artist attempts to achieve the ultimate goal of bridging the interspecies divide. As Wilson says, “In each animal’s gaze we see a part of ourselves and catch a fleeting glimpse of another world, a world we once fully inhabited deserve to follow their own unique path into the future, wherever it may lead them.”

Brad Wilson’s The Other World will open at photo-eye Gallery on November 6, 2021 with a book signing being held on the same day from 4-6pm at the Gallery’s new Rufina Circle location.

The Other World: Animal Portraits, published by Damiani, presents Brad Wilson’s beautiful, vivid wildlife portraits in lush color across full landscape spreads. Photographed on location in wildlife sanctuaries and conservancies, Brad Wilson’s emotive portraits showcase the singularity of each of his animal subjects in the small details that make them who they are. Wilson worked with animal handlers in sessions ranging anywhere from 1-4hrs (sometimes longer), most of which were comprised of waiting for the animals to present themselves to him. This method of photographing, which emphasizes an “authentic encounter” with the wildlife even in a modified studio setting, enables the audience to understand the relaxed, but incredibly powerful presence of each animal that Wilson captures.

Brad Wilson is a photographer based in Santa Fe, New Mexico. He studied studio art and art history at the University of North Carolina, Chapel Hill after which he moved to New York City where he eventually committed himself to working as a commercial photographer and fine artist full time. He has produced two other titles in addition to The Other World, those being Wildlife (2014) and Tiere Vor Der Kamera (2014) through Prestel Publishing. Wilson’s images were selected as the global face of the Microsoft Corporation from 2016-2020 and is included in the collections of the New Mexico Museum of Art and the Blake Collection as well. He has shown work from the Affinity series widely both nationally and internationally.