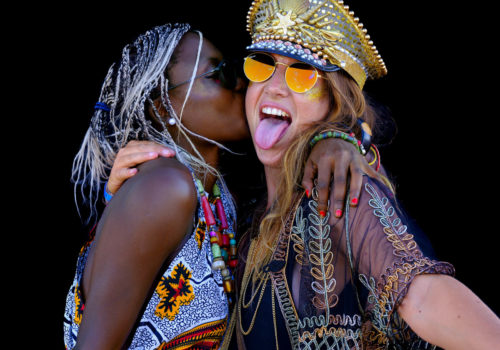 I brought together three authors who, through their works, report and testify on situations that range from the strange to the unknown to bring us back to our daily life which has also become invisible. Works in different styles, images of photographers as well known (in their spheres) as they are different. Three pearls from Aubrac.

Benoît Feron is the “globe-photographer” that everyone knows for his major reportages on the state of the planet, mainly in Africa. None of this before our eyes, a series with slightly aggressive colors in their saturation to take us into a world that is a little, a lot, very crazy. The images install us in the space of the Burners of Nevada or South Africa. These somewhat closed events that are like a giant happening. They are centered around creation and freedom of expression. It is obvious that photography, despite the technical and natural obstacles of the desert, has found its place there with Benoît.

The slide show also presented during his conference was, in my opinion, a little too traditional with regard to the subject dealt with. But, there was nothing to say about the photographs, that goes without saying.

The series of photographs presented in the Buron des Bouals is taken from the important work carried out on the domestic relations between elephant and man. Of course, these are the elephants of South East Asia.

It’s quite a story and the photographs of Jean François tell this story not being satisfied with a pure and simple narration. A simple chain on a cracked dermis tells us more about the domestication of this colossal pachyderm than twenty films or videograms. The photographic image is as inimitable as it is essential when it comes from competent creators.

Very good work on the part of this English photographer with a discreet Leica, firmly and comfortably installed on the belly of his master. This true professional, installed in Paris for more than forty years, was a sought-after photographer in advertising, then he suddenly fell, one fine morning, into his real personal creative concerns. Classical music put into images occupies his research when he is not strolling in the Cartier Bresson way. His work that is still analog focuses on shooting, after which it is the business of the laboratory. A greater personal involvement during the various stages of the development of his film (which he chooses with the greatest care) would be welcome for obtaining his final images. The precision upstream and up to the click is perfectly up to the objectives sought for obtaining the final works.