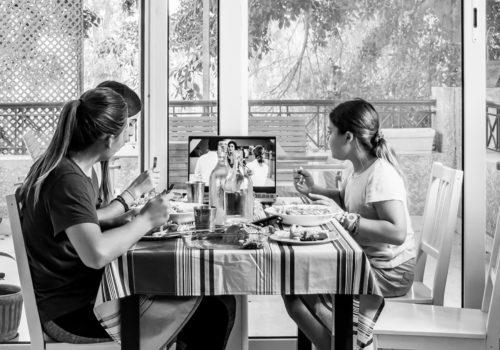 As part of PHOT’AIX 2022 and the extension of the exhibition at the Municipal Archives Famille(S), this Album(S) exhibition at La Fontaine Obscure presents five other art views on the theme of the family album, recomposed or composed.

Katell Delia: Meanwhile, from Malta to Tunis
“My Maltese paternal family has kept many photos from the time when they had to immigrate to Tunisia. At one point, these photos were no longer enough for me. I felt the need to go there, both to feel the scents, the sounds, the atmospheres, but also to remember those moments that I shared with him.”

Nathalie Guironnet: Three sisters
“This series on “the sisters” is a very personal and very intimate work which was started during the confinement in March 2020. This momentary stop and the withdrawal of the family into itself gave me the opportunity to be able to follow, as closely as possible, their moods and their relationships.”

Ingrid Dorner: Edit
“To the negatives of my grandmother, I superimposed mine. By this act, I mix two looks and two eras, I follow in the footsteps of “Grandma Edith” while shaking up the fixity imposed by the original clichés. This physical contact of the two negatives becomes an act that makes sense: a carnal manipulation between past and present.”

Noélie Giraud: Shades
April 2020. I took out my old analog camera, I gave my daughter Margot the cassette recorder and the super 8 camera to my daughter Billie… we wrote a film, we shot it as a family. And I took pictures…
As if this suspended time of confinement had opened up a nostalgic space for a family that once again took unlimited time to be together: classes for children at home, lunches only when we were hungry, all these compulsory and anxiety-provoking schedules disappeared, and then suddenly … eternity.

Christian Manteau: Rise and Fall
“We collected the proofs in a beautiful album; the final work was framed, and found its place on the mantel of the fireplace, or on the wall of the living room. Then generations fading away these were cast aside, put in the closet or in the attic and, one sad day, they disappeared from family memories, to end up in the middle of a thousand old things: Rise and Fall!”