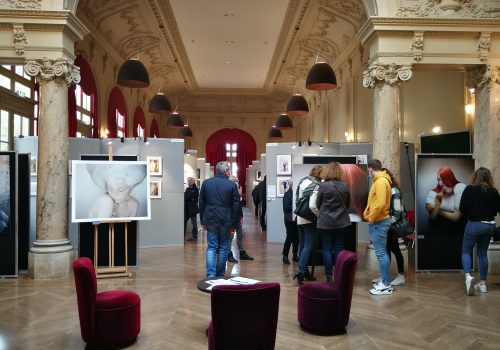 The Phémina festival is a mixed festival. If the promotion of the feminine is at the center of his approach, it presents both men and women photographers. Mixed also in the very wide variety of looks without any school winning it.

Beyond the very good work of the festival guests Isabelle Chapuis and Niko in a rather “fashion” perspective, here are my favorites.

These 6 artists, five women and one man, illustrate wonderfully what a “feminine” gaze can be. One which is often caricatured or silenced that is only rarely allowed the possibility of making its sincere, human and intelligently singular voice heard. Thanks to the jury including Sylvie Hugues.

Beautiful black and white prints for a surreal atmosphere without special effects or editing just a light and extremely refined situations. A lost universe, very defined but without certainties, very personal all in understatement and unsaid words for a strange personal confinement.

Nothing can be said about this series without betraying it. But the contract of questioning the feminine / feminist is certainly filled with a lot of humor and second degree. A very stimulating reflection on our world from the best pages of Borges.

Probably the most demanding series of this festival. Candice puts in diptychs an image of the hands of surgeons, during maxilo-facial operations and the portrait of the person whose face has been reconstructed, without looking away from either of them. These images, despite the presence in Philippe Lançon’s series, never fall into the spectacular and, on the contrary, testify to a formidable humanity and admiration for both the hands that heal and the damaged faces that are found. It is extremely powerful and mastered without ever falling into difficult medical objectivity.

A huge sensation for this series which tells about war, chaos without showing it and when it is no longer there. Dark, nocturnal images, less for what they show than for what they do not reveal. Violence is omnipresent there without ever being seen. Far from a journalistic vision, an illustration of the lasting interior ravages.

“When is tomorrow? “An immense sympathy for a photographer who does not flee into the abstract or poetry but faces the dark reality of the world of exclusion. The gaze is tremendously human, focused on the little things, the little pleasures and the expectations of a sometimes dilated time. Misery is terribly present in smiles that hardly appear any more, fleeting tenderness. Not spectacular but powerful work that leaves a lasting visual feeling.

With her beautiful prints taken with a large format camera, Helene Nugnes takes us out of time. An exploration of the strange feeling of unreal confusion that stuck us out of a dream. Quotes, universes that loom without anyone really expressing themselves and above all, cannot be strong enough to completely print the sensitive photo paper. A poetic attempt to capture the ephemeral and the indecisive.