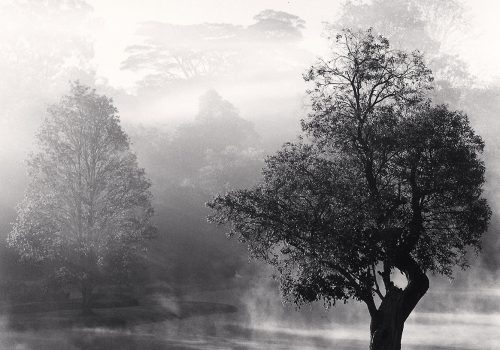 This is the third installment the new online series by Peter Fetterman Gallery called the Power of Photography highlighting hope, peace and love in the world. We invite you to enjoy and reflect on these works during this time.

“I have known my friend, Michael Kenna, for over 40 years now. I think we both came over on the same banana boat steerage from the UK.
I have watched his career progress from being Master Printer for our mutual friend, Ruth Bernhard, to a major artist in his own right. He has never lost his humility, grace and curiosity and his technical prowess and talent just gets stronger.
This brand new image just seems so appropriate for our current times. May the gentle mists roll over us and bring us peace.”

“Thurston was such a joy to be around. Typically English in his demeanor, very modest and humble about his incredible achievements, but with such a life force.
This image is pure, pure joy and I see it every day.“

“There is something so seductive about Lilo Raymond’s work.
Her on-the-surface simple, domestic interiors evoke a deep range of emotions. A longing for calm and respite from a chaotic world not far from here.
Is it the light or the white or both that makes us want to inhabit her rooms and never leave?”

“Elliott Erwitt – another all time favorite human being and photographer. Intelligent, insightful, gracious and human.
On temporary leave from army service, Elliott was sleeping on the couch at his friend, Robert Frank, and his wife’s apartment and captures this wonderful joyful moment.”

“Many years ago, I was visiting a small exhibition of people’s favorite photos in Los Angeles and came across this image of a young boy who lived in a special school for blind children. I had never heard of Charles Harbutt so I tracked him down. He was so modest and humble in spite of being the President of Magnum Photos.
Here the blind child is searching for the light he cannot see. Isn’t this what we, who are blessed with sight, are always trying to do?”

“I grew up loving Sinatra. Probably like a lot of kids I used to sing in front of a mirror with a pretend microphone.
He was so cool and I ended up meeting him in 1981. In my former life I produced a film with Luciano Pavarotti. Pavarotti idolized Sinatra. Sinatra idolized Pavarotti. Sinatra graciously hosted the opening night party for us in NY and I got to meet him in these dreamlike circumstances.
Flash forward many years. We hosted an exhibition of all the great Sinatra images at the gallery in collaboration with the Sinatra family who were just great to be with. They thought the exhibition was just so classy.
This was Frank Sinatra, Jr’s favorite photo of his dad. He said that was him.”

“Martine Franck was one of the most gracious people I have ever met.
She went out of her way to introduce me to so many great photographers like Willy Ronis, Edouard Boubat, Sebastiao Salgado because she thought it would be good for me and for them.
She was a great photographer in her own right but completely self-effacing. If you look very closely at this image, you will see a solitary woman walking in the far distance in the snow.
Snowy imagery and black and white analogue printing, a marriage made in photographic heaven.”

“A chance viewing on Instagram by one of our fashion clients who urged us to seek out this young, emerging Hungarian female photographer from just this one image.
Such is the power of photography that this image has changed both her life and ours. We have been given the gift of a great new photographer to collaborate with and she has been given the gift of being able now to support herself as a full time artist due to the enormous global support of her rare and original talent.”

“Imogen Cunningham, soon to be the subject of a major Getty Museum exhibition, captured this intimate portrait of her fellow photographers Edward Weston and Margrethe Mather with such exquisite tenderness and insight. One of the great love stories in the history of photography, also stimulated equally great work at this time from the sitters.”