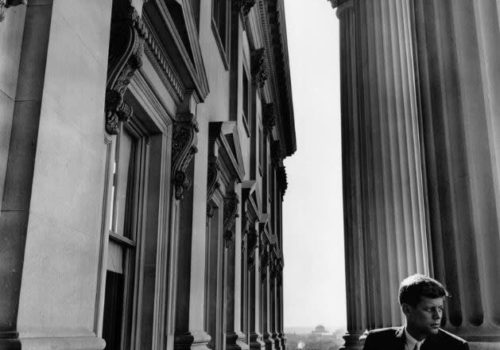 Peter Fetterman Gallery presents a new online series called the Power of Photography highlighting hope, peace and love in the world. We invite you to enjoy and reflect on these works during this time.

“This is my favorite Arnold Newman image. Such a great environmental portrait with a true sense of destiny as JFK looks to the future.

Where is our leader now?”

“Give me your tired, your poor, your huddled masses yearning to breathe free.”
~ Emma Lazarus

“When I first met Ernesto I knew instinctively that here was a new talent, bursting with energy and fresh ideas. How many times had I seen images of this American Icon but it radiated a special transcendence which bowled me over. Now more than ever do these words ring true.“

“August Sander’s epic projects are so revealing and intense. Totally masterful and encyclopedic. Absolutely one of the great Masters of Portraiture. Here is a moment of lightness and joy. I suspect this boy echoes this feeling.”

“I met Flor Garduno over 30 years ago when she was given an exhibition by Foto Fest. She did not speak any English and my Spanish was limited at best. I saw her exhibition “Witnesses of Time” which brought me to tears. It was so powerful and haunting.

I went up to her and just put my hand on my heart and wiped the tears from my eyes. I hugged her and after that we started to work together.

“The Blessing” is part of a wedding ceremony she witnessed. It comforts me and give me hope every time I look at it.”

“ I have never been to Japan but Paul Caponigro immediately transports me there and offers up the solace and peace I am searching for right now.

One of my favorite human beings, his talent and dedication have been a source of inspiration for over 30 years now.”

“I had the great pleasure of working closely with Edouard in the 1990’s whilst he was alive.
He was exactly what his photos are still – sensitive, gentle and tender.

Here is a rare gem I asked him to make for me.”

“No one made more beautiful prints than Mr Penn.

I feel I have to be very formal even when I think about and write about him. He commands reverence. He is certainly in a class of his own. The dedication and craft it takes to execute an image like this cannot be underestimated.

I owned a print of this 30 years ago but had to sell it to start up my gallery. It broke my heart to part with it, but a print of it came back to me recently after all these years of absence. It is truly inspirational and reminds me that nothing in life worth having comes easy.”

“I’ve always been interested in politics and government and power and how it all does or doesn’t work.

No more so than now… So for me this image has a special resonance.

Every politician cannot afford to ignore the giant shadow that Abraham Lincoln casts and hopefully his exceptional qualities washes over them during this special time in world history.”

Sara, the Only Flowers of Her Youth, Warsaw, Poland, 1939

“When I was growing up in London when I was about 16 years old I picked up a copy of Roman Vishniac’s book “A Vanished World”. It was the first photo book I had ever bought. The power of it totally took me over, especially this image.

Flash forward 5 years, I had scraped enough money together to go visit New York which was always a dream. I don’t know what possessed me but I looked through the telephone directory (do any of you remember these?) and saw that he was listed. I took a deep breath and mustered up the courage to call. Mr Vishniac answered and I nervously fumbled my way to say I was so moved by his book and this was my first day in America and could I come meet him? He said, “Come round tomorrow. I’m busy but I will give you 10 minutes.”

I went to his apartment on Upper Broadway and stayed 5 hours. I must have looked like a waif and his wife kept feeding me continuously. He was so intelligent, so erudite, so inspiring with his stories of how he captured these images of this community who were doomed to perish. I asked him more about “Sara”. He told me she had never seen flowers in person and that her father had painted them for her to try to give her hope that there was a world outside.

It is still one of the greatest photos I have ever seen.”

“Visiting our great friend, Pentti Sammallahti, in Helsinki we had just finished lunch when we passed a bookstore and in the front window was a book of photographs with this image on the front cover. It stopped me in my tracks and I asked Pentti who was the photographer.

Caj was elderly, he is 91 years old now, and had closed down his darkroom.

We met and Pentti offered to graciously help him print a few prints of this image for me in his darkroom. I love images of mystery and having lived with this image for many years I have never quite unraveled its story. But that doesn’t matter. I am still hypnotized by it and always will be.”