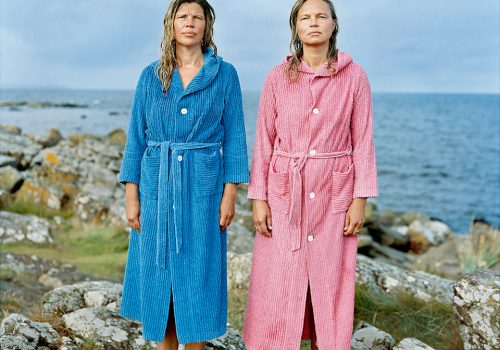 The small coastal village of Torekov, Sweden, is known for both its local pier,«Morgonbryggan», and for the associated daily ritual of a morning dip in the sea. Locals and summer guests are avid disciples of this sacred ritual which can be both solitary and social. There are unwritten codes of behavior related with this activity, including the most visually obvious, the selection of one’s bathrobe. Through the slow and repetitive process of working with a large format film camera, the photographer Peggy Anderson has gained insight into this community, her native country and her own place within it.

From the text by Lyle Rexer:

“The characteristic regalia of the morning dip appeared at once modest and distinctive, a kind of low-level signifier that seemed to say something about the social class, personality, and aesthetics of the bather. The bathrobe represented social and historical data in a way similar to, say, the industrial structures cataloged by the German photographers Bernd and Hilla Becher, who took a page from Sander’s typological book. Not to belabor the point, but the bathrobes offered an initial point of comparison to specify same and different, type and individual. The bathrobes were also an entry point for the project, since Anderson herself was an avid participant in the ritual. And over time, as people in Torekov got to know Anderson and agreed to be photographed, and especially as she herself expanded the pool of subjects to include bathers from the nearby local campgrounds, the project began to suggest generalizations about Swedes:This is what Swedes do in the summer; this is where lines of class are crossed; this is how they dress and present themselves—a matter of attitude.

But that’s not exactly the way things went, or rather, that’s not the most important thing that we see. It has something to do with the camera. Anderson purposely chose to work with a 4×5 large format film camera. It is a large, slow, and somewhat cumbersome instrument that to contemporary eyes looks as much like an antediluvian remnant as the bones of a T-Rex. Yet it is beloved by many photographers not just for the detail it offers but even more for the process it entails. Shooting with a conspicuous machine, on a tripod, with each frame individually considered—not least of all because the film is so expensive—changes the way people in front of the camera behave. For one thing, they tend to be less suspicious and more curious. They are not being surveilled but attended to, and that is a very different experience. Such a camera makes photography important again by making the process of being photographed more intentional, even formal, closer to having a portrait painted. The pace slows down. Something significant is taking place, something not in a hurry”.

Peggy Anderson is a photographer based in New York and Sweden but currently living in Paris. She graduated from The International Center of Photography (ICP) in 2013. Since then she has been pursuing various photography projects. The Morning Dip was exhibited at Fotografiska, Stockholm in 2015.