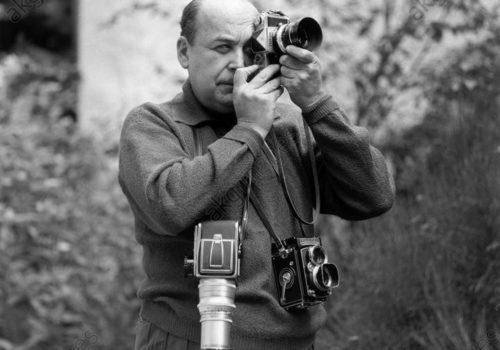 Paul Almasy is not well known. Or, if he was, he was considered the less important of the “big” Hungarian photographers.

In his old age, Paul became a friend even as I began my career as a photojournalist and then as a TV reporter.

It was the defense of the profession that brought us together, I was then one of the heads of the photo sector of the National Union of Journalists. A pillar of the ANJRPC, he was very attached to the status of journalist for press photographers, at a time (vote of the Cressard law in 1974) when it was still difficult for photographers to earn a salary.

Paul taught photojournalism at the Center for the Formation of the Journalistes, and the CFJ was in the same building on rue du Louvre in Paris. We regularly had coffee together.

So we were friends, despite the age difference. Me, the beginner. Him, having traveled the world and the century.

Born in 1906, Paul Almasy did not a priori intend to be a photographer. A political science student in Germany until 1927, he was drawn to journalism. His first steps in the profession took him to Morocco during the Abd El-Krim revolt in 1925.

It was not until 1935 that he started to take pictures to illustrate his articles.

Like many other compatriots, he moved to Paris and decided to live in France.

He started working for the Swiss publisher Ringier and the Schweizer Illustrierte. Almasy bought his first camera in Lausanne, a Leica, which he  kept  all his life and later three Hasselblads with which he said he had taken 80% of his images, not counting a Rolleiflex.

Typically, the camera was an instrument for his journalistic work. He was never part of the artistic process preferring the content to the frame. He said in an interview with a Swiss newspaper: aesthetics is only the “second zone” (zweitrangig in the text). It should never dominate in the work of the photojournalist, whose role is to inform, not to distort. He interviewed and photographed Mussolini, Eisenhower, de Gaulle, Adenauer, Nehru, André Breton, Chagall and Giacometti. He acquired the French nationality in 1956, and is one of the founding members of the “People of Image” created by Albert Plécy and Jacques Henri Lartigue. He traveled in Africa and Asia. He made numerous reportages there, worked for the information services of the American government, carried out missions in the polar regions on behalf of the WHO and went for reportages from Alaska to Cape Horn, he was commissioned by the International Labor Office to report on the Far East. He also worked, for years, for the UNESCO Journal. Lots of documentary, sociological and, often, educational and cultural work. In all 260,000 photos taken all over the world. In one of his interviews, he was amused for not having completed his round the world tour of the countries: “After the breakup of the USSR, there are eleven nations of the world that I missed.”

But, in truth, a small part of his photos went to Monaco.

Between 1997 and 1999, I was preparing what would become a documentary for ARTE and a book at Le Seuil, on the history of the principality during the war.

Looking for photo documents from this period, I remembered that Paul had lived in Monaco during the war. Journalist for the neutral Swiss press, he had the authorizations not enjoyed by the local press. And, above all, he was supplied with Agfa films, which was very rare at the time, and of excellent quality.

At AKG – Paris, I found  his Monaco fund badly labeled by the agency. Working on local history, I took the opportunity to give some indications on the content and the context of the images.

A few years later I became a historian, I was commissioned by Prince Albert of Monaco to reflect, among other things, on the future of the photographic collection of the princely palace. An exceptional collection of several hundreds of thousands of photos from 1856 to the present day.

Paul told me he had sold Prince Rainier pictures of the war. After a long search, I found a box containing several hundred negatives actually corresponding to the war and completing the AKG collection. A box never opened since the sale of the negatives to the palace.

Paul was very organized. Each negative was in an envelope. Which had a number and a negative print. A kind of mini contact sheet. To reference these images, I had in my hands some of his articles whose photos were the captions.

Always the text with the image. Paul was a photojournalist who called himself a journalist above all not a photographer!

Nonetheless, when compared to the rest of the local photographic production, there is no doubt that he was both a good photographer and a good journalist. Always where needed, avoiding, as much as possible, the cliché inherent to the principality, even during the war years, his photos provide a real panorama of the local history during this period.