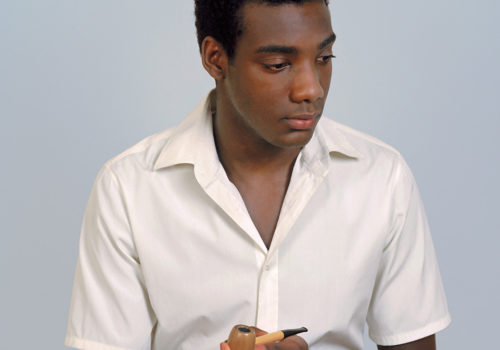 Oskar Schmidt composed the portraits and still lifes of Centro in painstaking analog steps. Only at the end was the process transferred into digital format. His photographs, with their modular system of similar image inventory and similar color spaces, appear to have undergone a digital creative process. Though the path leading up to the exposure of the film is fully analog, Schmidt’s mindset of a contemporary reflection on photographic processes is thoroughly digital. The post-production of Oskar Schmidt’s pictures begins with scanning the negative and its image variations. From then on, the artist operates in digital image space, which involves much more than simply balancing contrasts and brightness. Schmidt collages individual parts from the various pictorial data in cut-and-paste mode to produce new meta-images. He then smooths and retouches the transitions. In a next step, Schmidt adjusts and defines sharpness and partial unsharpness and through this subtle and barely visible intervention directs and regulates the viewer’s gaze. As a result, the sum of interventions is less important than ensuring that the image as a whole appears coherent and credible.

In many of his works, Schmidt transposes renowned paintings from art history into the photographic present. In his picture of a girl with a fan, for example, he refers to Pablo Picasso’s Femme à l’éventail (1905) and Jeune fille à l’éventail (1902) by Paul Gauguin, which was acquired by the collector and founder of the Museum Folkwang, Karl Ernst Osthaus (then based in Hagen) in 1904. In Schmidt’s work, the position of the body and hands, the direction of the gaze, the accessory of the fan, and also the abstracted, simple background are appropriated from the more or less latent knowledge of the original paintings. Today, this can be read in a controversial sense against the colonialist background of the time. Interestingly, Gauguin’s work is based on the black-and-white photographic source of his artist friend Louis Grelet from the year 1901. In the photograph, the 14-year-old Tohotaua (the wife of his cook) looks into the camera. Behind her, the viewer can see the suggestion of patterned wallpaper and some framed pictures. Her absent, almost empty gaze not only looks through the viewer, but also into the distance outside of the pictorial space. In the painted version, Paul Gauguin similarly empties and condenses the image. Schmidt’s approach focuses on a comparable moment of exaggeration and results in a photograph cleaned and purged . The conceptual sleekness is reflected in details such as the skin and hair or the soft shades of clothing. This is continued by the absolutely flawless surface of the photographic print and the texture of pixels and grain, which the naked eye can hardly grasp.