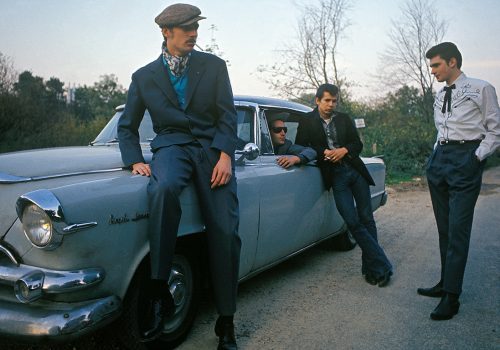 Don’t be worried Yan Morvan, it’s not because magazines no longer publish your pictures that your career is over! look you have a great exhibition at Paris Photo! the world’s biggest photography fair! a solo show even! the star of the stars! Obviously your gallerist is a little worried because you do not show large format images ready to be hung above the sofa of the living room of the happy buyers.

And then you are dealing with rather serious subjects; War, violence, torn apart youth, prostitution … It may not please everyone, but were chosen  for that.

You’ll be happy, if your photos are sold you can continue to frequent the cities and battlefields in which you indulge! Newspapers may also publish pictures! since they are royalty free.

We will talk about upsetting topics, in the culture page, it’s cleaner.

Some will ask the question: Is real photography documentary? so they will hesitate … Anyway it is much cheaper than painting!

And do not hesitate, come to me you will find pictures of blood and tears and a delighted photographer who wants to remain happy.

A solo show at PARIS PHOTO with Galerie SIT DOWN

For 45 years, Yan Morvan has been photographing rebellions: youth, identity struggles, armed conflicts. In addition to the war, the photographer also shows a societal vision of humanity through the upheavals that animate it. His solo show at the Sit Down Gallery presents mostly vintage prints, from his famous series: the 80s Bangkok echoing the book of NOEVE editions, the Paris Gangs and the Rockers of the 1970s and 1980s, the English Punks and the Irish separatists of the Thatcher years, his work done with a large format camera on the Lebanon war made between 1982 and 1985 and finally a selection of cibachromes  from his series “Battlefields” also made with a large format camera, long term work, for which the photographer has traveled the world to the scenes of major clashes where nature always takes back its rights.

A photo book, “BKK”,  to be published on November 7th by NOEVE editions

Yan Morvan gives us an immersion in the Bangkok of the 80s where he spent five months. The atmosphere and the substance of the cities are restored to us through the photographs and a text written in Situ by the photographer. He reveals the atmosphere of the city at this very precise moment. “BKK” allows us to witness the evolution of the eye of a young photographer snorkeling in a world that can quickly suffocate and lose you.