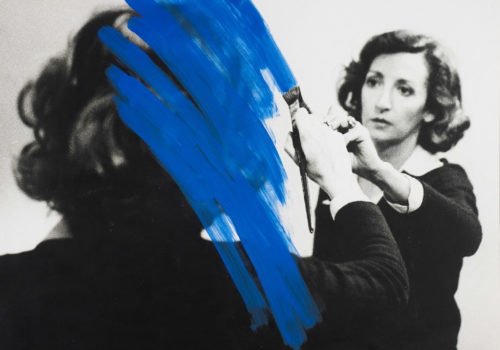 The Jeu de Paume pays tribute to Portuguese artist Helena Almeida, an important figure in conceptual art who is still largely unknown in France.  For her, the body is the vehicle behind an interdisciplinary practice where photography plays a major role.  Being and doing, artist and model, masculin, feminine, Helena Almeida takes on these points of contention with intransigence, first and foremost, to move beyond and free herself from the limits of painting in search of a three-dimensional space.

Towards the middle of the 1970s, she incorporated elements of her studio into her photographed performative compositions during a time when photography was still considered a secondary medium, as emphasizes João Ribas, co-curator of the exhibition and assistant director of the Serralves Museum in Porto where this retrospective was already exhibited.  From a feminist perspective (even though she says it’s not) her fragmented, disfigured or even gagged body incarnates an interior state, an emotional charge which is reinforced by her series “Hear Me” “Feel Me” See Me”.  Metaphoric and poetic, these actions, staged carefully and at great length, are a summary of great depth and coherence.  Dressed in black, as is tradition in her country, the artist pursues her exploration of desire and interiority.  This is what distinguishes her from other female artists like Cindy Sherman who turn to self-portraits in sophisticated settings.  With Helena Almeida, limited means, gestures, and words are wanted to benefit the exploration of the image.

In between the fleeting instant of the shot and precise preparatory sketches,  a register of presence is conjured in the viewer.  Her recent series “Seduce”, with its awkward poses, translates the complexity of the creative process, but danger also represents this sentiment.  Moving beyond the limits of one medium to another (from painting to photography, video, and finally to drawing and choreography) she fills the entire space with these rituals that are immortalized by her husband, architect Artur Rosa.  Subtle interweaving, remarkably presented in this first retrospective in France of an artist whose “Corpus” fascinates, intrigues, and never ends.