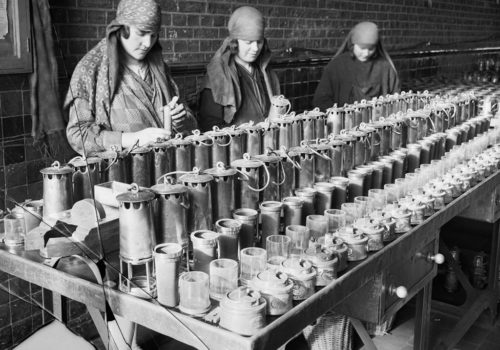 In this first comprehensive retrospective of François Kollar’s work, the curators of the exhibition, Pia Viewing and Matthieu Rivallin, have decided to combine the artist’s photographic talent and the idea of progress and the evolution of industrial France.

Born František Kollár in 1904 in Slovakia under the Austro-Hungarian Empire, the immigrant photographer worked in and for France. He started out as a lathe operator at the Renault factory in Boulogne-Billancourt, and “it was at this time that he encountered matter and machine.” Fascinated with photography, however, he dreamed of becoming a photographer. He gained some experience at a printing house; then in 1930 opened his own studio in Paris. His wife Fernande became his first model and faithful collaborator.

The exhibition opens with an oversize print of Porteur de rails, a nod towards the enlargement of the same image showcased at the French Pavilion in the International Exhibition in New York in 1939. This impressive portrait, taken in a low-angled shot, symbolizes workers’ empowerment and evokes Vera Mukhina’s sculpture The Worker and the Kolkhoz Woman featured at the Universal Exhibition in Paris in 1937. Was it a source of inspiration for an artist who had been a railroad worker in his native country? This is a good place to start.

By combining François Kollar’s documentary work and historical context, the curators allow us to discover a photographer “who always worked in the service of…,” explains Pia Viewing. He fulfilled his advertising, industrial, and fashion commissions with precision, excellence, and beauty. A photographer who mingled with the high and the low of the French society, he was a chameleon who adapted to the environment, except during the Second World War when he retreated with his wife and children to the Poitou region.

The three major sections of the exhibition offer a chronological portrait of a photographer who experimented, used photomontage, solarization, and lighting effects. He was a perfectionist when it came to printing his images. Note how he nuances grey and deep black to dramatize the cloudy skies.

The whole produces a dual sensation of power and tenderness. A similar effect is also generated by the relationship between the body and the machine, something the photographer was very familiar with, and which he implicitly portrayed in neatly composed images (including those cropped in the lab).

Between 1931 and 1934, he fulfilled the largest photographic commission to date, reporting on the working conditions in France. It was thanks to this commissioned work that he became known as “ the Kollar of industry.”

.This project was followed by a large reportage assigned by L’Agence Économique des Colonies, as well as luxury and fashion photos, which he engaged with off an on for nearly fifteen years.

The design of the three large exhibition halls, which sometimes suffers from inadequate lighting, is completed by numerous documents (leaflets, magazines, personal albums) and an extensive slide show. The rooms are color-coded: white, blue-grey, and light beige, corresponding to the curators’ pedagogical intention.

The beige in the last room is particularly interesting because it nearly blends in with the wooden frames, thereby intensifying the magical black-and-white tones in François Kollar’s work.

In addition to the documentary dimension of his work, the power of this photographer lies in his evocation of a “journey”: hence the exhibition walls are brimming with gems such as Les enseignes lumineuses (“Illuminated signs”), La bouche du tunnel (“The entrance of the tunnel”), or La fabrique à papier (“Paper factory”), advertisements for Hermès or Chanel, and many other photographs which, I have no doubt, will resonate with the visitor.

François Kollar is a photographer who resembles his images: somewhat mysterious, beautiful, and discreet, such as his small picture of a river outside the city of Abidjan, A Working Eye which conveys the nobility of men who, one day, had to travel far from home to earn their living.