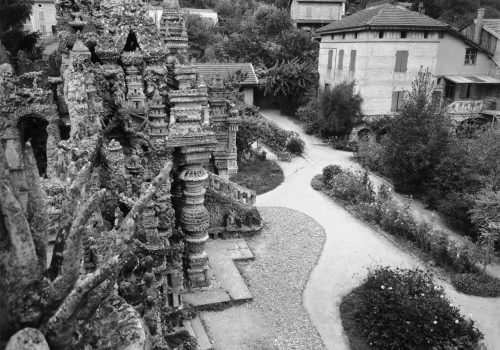 The exhibition brings together unpublished photographs of the Palais idéal by Robert Doisneau and the sculpted works of Simone Fattal.

Taken in the 1950s at the Palais idéal, in black and white and in color during the 1970s the photographs pay a moving tribute to the generations of visitors who have come to discover the Palais idéal since its opening decided by the facteur Cheval himself in 1905. These images found during the confinement come to meet the sculptures of Simone Fattal, and open a reflection on time and memory, with regard to the work of the facteur Cheval.

Born during confinement, the Chimeric Builders exhibition saw the light of day following the rediscovery of photographs by Robert Doisneau on the one hand, and the desire of the director of the Palais idéal , Frédéric Legros to show the work of an iconic artist with a solar personality, Simone Fattal, on the other hand.

The photographs offer a new interpretation of Postman Cheval’s Palais idéal , presented under the gaze of Robert Doisneau either as an architectural icon or as a place that has been admired by the public for decades. Through these pictures, we can trace a genealogy of the Palace, its developments and its restorations.

As a counterpoint, Simone Fattal’s sculptures, like the postman Cheval, show an art of creating worlds. A way of making mythological characters emerge from the earth, a bestiary. We also find common themes: The Lion guarding the entrance of Simone Fattal recalling the lion sculpted by the postman Cheval in front of the Source of Life, the three Warriors of the sculptor coming to meet the three Giants of the illustrious Postman .

The poet Khaled el Najjar spoke of Simone Fattal’s act of creation as a genesis and the same applies to this imaginary Palace built by one man.

“No wonder I get so many letters from unknown creators. Men of instinct, they smelled an accomplice.” – Robert Doisneau, 1989