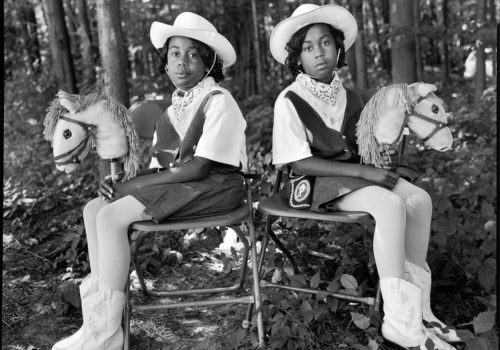 On March 3, the National Museum of Women in the Arts (NMWA) opens Mary Ellen Mark: Girlhood, a new exhibition of works by one of the most prolific documentary and portrait photographers of her generation. The exhibition features approximately 30 images that span Mary Ellen Mark’s 50-year-career, depicting girls and young women living in a variety of circumstances all over the globe.

Mary Ellen Mark (1940–2015) is known for her compassionate and candid depictions of subjects living outside of mainstream society. Over the course of her career, Mark traveled extensively, creating bodies of work in diverse communities in the United States as well as India, Mexico, the former Soviet Union and other countries. While Mark photographed people of all ages and from all walks of life, she was particularly interested in children. “I don’t like to photograph children as children,” Mark said. “I like to see them as adults, as who they really are. I’m always looking for the side of who they might become.”

“Through her camera lens, Mark cut through social and societal barriers to focus on overlooked communities in the United States and around the world,” said NMWA Director Susan Fisher Sterling. “Her portraits document individual lives with a familiarity that makes them universally relatable. NMWA is grateful for the generous donation by the Photography Buyers Syndicate that allows the museum to spotlight this important photographer.”

This donation of more than 160 Mary Ellen Mark photographs is from the Photography Buyers Syndicate, a group of donors who purchase large photography collections and frequently donate them to public collections. The gift includes images from Mark’s earliest work in Turkey in the 1960s to photographs taken on Polaroid film in the early 2000s. Included in the exhibition are select works from some of Mark’s best-known series, including “Prom,” “Streetwise” and “Twins,” which together offer an intriguing glimpse into the artist’s wondrous and uncanny vision of girlhood.

Mark did not aim to construct a particular narrative of girlhood, nor did she necessarily intend to deconstruct common stereotypes found in the depiction of girls. She rarely intervened in the poses or surroundings of her subjects, and most of the images in this exhibition come from larger bodies of work that were not specifically focused on girls. Rather, Mark observed her subjects as they were—dancing, singing, exploring, staring—and as they were becoming—witnessing death, experiencing intimacy and love, smoking or being made up. Each photograph contains a moment on the precipice, poised for whatever comes next.

For example, in one of Mark’s earliest pictures, Emine Dressed Up for Republic Day, Trabzon, Turkey (1965), her young subject stands facing the camera with one hand on her hip and the other placed by her pouting mouth, perhaps mimicking an older teen. While Emine’s pose and facial expression suggest an impatience to grow up, her unbuckled, dirt-stained shoes and hair loosening from its bow reveal markers of a rambunctious childhood.

In another series, shot at the Oregon State Hospital, Mark photographed women institutionalized because they were considered dangerous to themselves or others. The artist lived at the hospital in a ward adjacent to these women while she worked, taking time to know her subjects and build a sense of trust with them. For Laurie in the Bathtub, Ward 81, Oregon State Hospital, Salem, Oregon (1976), Mark came across a patient bathing and asked to take her portrait. The image shows a young woman in a deep tub, only her head and wet hair visible above the sudsy water. Cropped closely, the photograph gives no indication of its institutional setting. Her open, vulnerable expression belies her designation of “dangerous” by the outside world.

The artist often established long-lasting relationships with those she photographed, revisiting people and places as they grew and changed over many years. As a documentary photographer, Mark aimed to tell stories in her images; her photographs of girls seem to capture not only their vulnerability and defiance, but also each girl’s sense of the world before her.

In 1983, Mark began her influential “Streetwise” project with Life magazine, documenting runaway children living on the streets of Seattle. There, she met Erin Blackwell, called “Tiny,” with whom she formed a lifelong bond. Mark revisited the girl regularly from 1983 to 2014, a period that Tiny began as a teen sex worker and ended as a mother of ten children, with addiction, recovery and marriage in between. The artist captured much of her complex young adult life on film—encompassing transitions, hardships and joys. J’Lisa Looks Through the Blinds, Streetwise Revisited (2014) shows Tiny’s daughter peering through broken window blinds with an expression that is both anticipatory and apprehensive.

Mary Ellen Mark: Girlhood, presented in the Teresa Lozano Long Gallery of the National Museum of Women in the Arts, is organized by the museum and generously supported by the members of NMWA.

Growing up in Pennsylvania, Mark took an interest in photography at a young age, first picking up a camera at age nine. Her interest in the arts grew through her high school years, and in 1962, Mark was awarded a BFA in painting and art history from the University of Pennsylvania. Mark continued her education at the University of Pennsylvania, receiving a master’s degree in photojournalism from the institution’s Annenberg School for Communication in 1964. In 1965, the artist won a Fulbright Scholarship to photograph in Turkey for one year, an honor that Mark describes as “the beginning of my life’s photographic journey.”

While Mark built a reputation as a photojournalist, contributing photo essays and portraits to publications such as Life, the New Yorker, Rolling Stone, Vanity Fair and the New York Times Magazine, her work has also been widely exhibited in galleries and museums around the globe. She published more than 20 books of her photographs and received numerous awards and grants for both photography and journalism.

National Museum of Women in the Arts (NMWA)