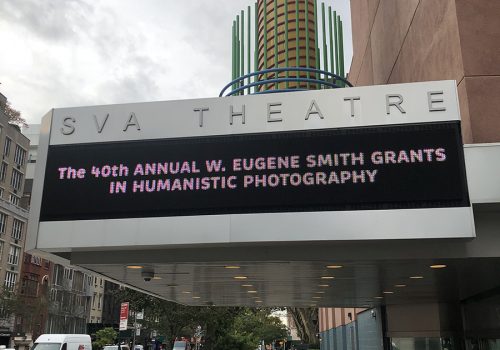 The ceremony for the W. Eugene Smith Fund for Humanitarian Photography is consistently New York’s most remarkable photography event of the year with outstanding presenters and consistently brilliant portfolios of recent work. And last night’s presentation at the School of Visual Arts Theater, on West 23rd, was one of its strongest.

This is the Fund’s 40th year; it was originally founded to honor the legacy of the great photo-essayist W. Eugene Smith, with its mission of giving financial support to worthy documentary photographers needing help to complete a long-term project.  <www.smithfund.org>

One of the highlights of the evening was a video by the recipient of the $40,000 grant, Yael Martinez  from Mexico with his “The House That Bleeds”<http://www.yaelmartinez.com/la-casa-que-sangra.html>.  This was the night’s most charged presentation, recounting the story of Martinez sorting out his situation in his homeland, where two of his family members have been killed. The work is full of threat and menace and sorrow and joy — his response to his daughter’s terror. Gut-wrenching.  Martinez’s acceptance speech began in Spanish then moved subtly into English. It was a uniquely moving and memorable selection.

In the handsome program the 12 finalists were announced, and their proposals were presented in videos. Noteworthy were the $5,000 fellowships given to Matt Eich and Nadia Shira Cohen.  The structure of the evening is always a bit confusing but projects from finalists Pierre Faure “Periferal France,”  Debi Cornwall “Necessary Fiction.” and Lalo de Almeida “Amazonian Dystopias” were particularly strong.

Other highlights included a world-premiere preview of the upcoming movie, “Minamata,” due to be released in 2020–a feature film about Eugene Smith and his photographic coverage of mercury poisoning in Japan in the 1970s. In the clips presented on the big screen, Johnny Depp was mesmerizing as Smith. The movie looks spot-on and the director Andrew Levitas’ remarks reinforced one of the most powerful themes of Smith’s work and our era: in the face of corrupt governments, corporations, and criminal forces, it sometimes takes enlightened chroniclers, artists, and journalists to speak for the oppressed. He says he will return with a benefit screening for the Fund.

Another highlight was the keynote address from Susan Zirinsky, President and Senior Executive Producer of CBS News. She talked about her career and referenced how the power of a still image can command everyone’s focus.  She was funny, wanting to be off color, and completely enthusiastic about the importance of the Smith Fund.  She actually illustrated her story with loose analogue prints of significant, even iconic images from important news stories. It was heartfelt, and the audience received it enthusiastically.

The Smith Fund has additional grants. The Howard Chapnick grant given to a non-photographer was presented to a charming and beguilingly overwrought Alicia Hansen, the founder and director of SALT. This is an impressive NYC-based organization that helps inner city kids by interesting them in photography and then keeping them focused on a potential collegiate career.

The student award — first established two years ago — went to Fawaz Oyedji from Nigeria for his “Yours in Arms.”

There was a loving and lovely tribute to the recently deceased Jim Hughes, author and founder for the fund. This was organized by Robert Pledge and presented by Fred Ritchin and Gene Richards, all legends themselves.

This evening was full of surprise and provocation. This event is always one of the photo community’s most impactful evenings on the New York calendar. And the Smith grants remain among photography’s most prestigious.