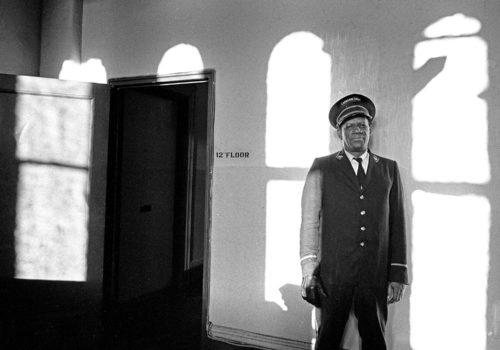 At the end of the sixties and the beginning of the seventies, New York became the Eldorado of fashion photography.
Many French photographers rushed there.
They were almost all barely 25 years old and all met in the mythical place of the time: Carnegie Hall.
Claude Guillaumin was one of them and he writes:

From 1967, New York saw the arrival of Frank Horvat for Glamour, André Carrara for Mademoiselle, Jean-Paul Goude for Esquire, Pierre Houlès, Claude Guillaumin for Glamour, Mike Reinhardt, Patrick Demarchelier, Guy Le Baube, Michel Momy, Jacques Davis.
The Carnegie Hall included in addition to the concert hall located at 57th Street, dance studios, music and living quarters for artists with a special entrance at 881 7th Avenue.
An “elevator man” maneuvered the elevator from the 1st to the 12th floor day and night and in particular one of them, Jimmy about 70 years old who smoked his joint every day.
The corridors were bathed in music or vocalizations depending on the floor.
In 1969 Bill Cunningham, who had 3 studios, sublet one to Pierre Houlès and myself on the twelfth floor, then later to Mike Reinhardt and Toscani.

Art Kane had a studio on the twelfth floor as well as Edita Sherman, former photographer of Broadway stars and who rented her room (daylight) for photo shoots.
Art often left his door ajar, I stuck my head in and we chatted for a while.
He only worked to pay child support for his two divorces.
He had a large studio, a bed and a kitchenette.

Pierre Houlès assisted Bill Silano whose images were surprising.
One day I meet him at the bottom of his studio and ask him why he always shoots at wide angle.
He told me come in and you will understand. Indeed his studio was five meters deep.

On the tenth floor, there was Antonio Lopez’s studio and another studio occupied by Cathee Dahmen, then myself and then by Patrick Demarchelier.
Since the time of our meeting in Paris in the 1970s with also Mike Reinhardt, Gérald Dearing and John Casablancas, in Paris or in NY, our lives with Patrick have crossed.
I followed his career and his constant progress in quality and originality, always at the forefront of fashion novelty.
We were good friends, Patrick, Mike and me. He was generous and not show-off. He knew where he came from, was proud of his achievement and shared it with his friends.

Another very beautiful character was present.

Isi Veleris, saved from deportation, he saw his mother leave by train for Auschwitz at the age of 9. At 15 he left for New York and became a photographer.
His studio was squatted by the “French Mafia” and from time to time by Guy Bourdin when he was shooting sessions for Vogue US.
I assisted him a few times and our great pleasure was to go for dinner in Chinatown.
Duc his former assistant came from time to time.
We spent weekends in the dunes of the Hamptons with Cathee, Pierre and Isi.
Guy loved to have fun. Isi was generous. He had understood that life was made of friendship and that wealth was a source of problems.
He only worked to earn a minimum subsistence  and many DAs offered him shootings which supplemented his pension from the American government.
Isi never asked for a rental dollar, just the purchase of laboratory products we used.

His studio was a five-minute walk from Max’s Kansas City, a mythical place, restaurant, bar, nightclub where rock bands performed. (Velvet Underground, Talking Heads, Patti Smith, Debbie Harris…)
Credit was possible for regulars.
You could also pay in works of art with, for example, at the corner of the bar, the car body compacted by Chamberlain.
From time to time, Andy Warhol made an appearance with his court, sometimes young girls dined naked.
Everything was possible in those years of protest. The city was dangerous but the artistic creativity was important and multidisciplinary.