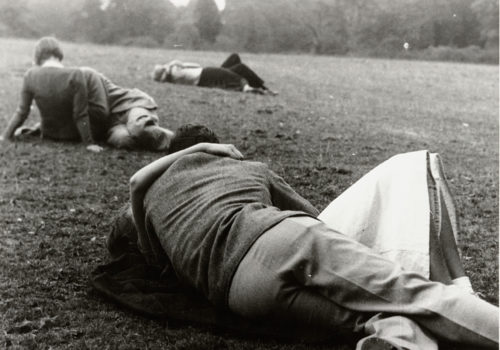 The legacy of Bill Brandt, one of the major figures of twentieth century photography, is split between a humanist documentary approach and an artistic conception of the real. As the title of the retrospective at New York’s Museum of Modern Art suggests, a large part of Brandt’s black-and-white photographs are set in a mysterious, high-contrast environment, where men, objects and landscapes appear between shadow and light. These can be read as a manifesto for the pursuit of curiosity, supported by his various remarks on the nature of photography, which he considered to be a means of seeing the world with fresh eyes, an experience that should lead to, “a sense of wonder,” as he wrote in 1948.

Besides his passion for lighting effects, Brandt was fond of lines. We can see them everywhere, especially in his shots of architecture and landscapes. They cut the image in two or three, bringing it to life, like the road at the foot of a mountain in “Giant’s Causeway, Antrim” (1956) or in “The Pilgrim’s Way, Kent” (1950) where a white trail leads towards the unknown. But Brandt is most adept with curves, the ones that delineate countrysides and lakes, a spiral staircase, and, especially, the female body.

Brandt’s nudes, taken between 1945 and 1959, are today his most famous series. They are singular in the history of photography, and represent his emergence as an artist. During these years, Brandt photographed his models in wide angle using a fixed aperture Kodak camera originally intended to document crime scenes. But there’s nothing grotesque about the results. They are, rather, an exceptional form of poetry suffused with authenticity and playfulness more than desire, passion or love. Brandt illuminates these women in the dark, lengthening their arms and legs, stretching out their figures (especially their rear ends), rounding out their backs, playing with the crossing of their limbs to create anatomical puzzles. The lobes of their breasts suggest their sensitivity, while the lines of their buttocks—an element too often neglected in nude photography—become personality traits.

Read the full article on the French version of Le Journal.