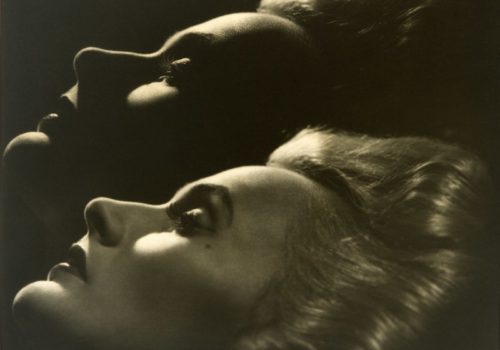 Annemarie Heinrich was born in 1912 in Darmstadt, Germany. Her father, a concert violinist and socialist who feared another war in Europe, moved the family to Argentina in 1926. Before settling on photography, Annemarie studied dance, music, and scenography, which had a great effect on the lighting and composition of her later work and served as an entrée into the worlds of art and entertainment.
Heinrich began her career as an apprentice to European émigré photographers. In 1930, at the age of eighteen, she set up her first studio in Buenos Aires. Surrounded by artists of every discipline – celebrities, film and radio stars, opera singers, ballerinas, tango dancers, and writers – Heinrich was central to the development and popularization of a new kind of photograph: the celebrity portrait. As Juan Travnik writes in Una cuerpo, una luz, un reflejo (Ediciones Larivière, 2015), “Annemarie Heinrich so became the creator of a genre which in Argentina, as well as in other countries, developed side by side with the growth of the film industry and the popularization of the radio.” For over forty years, she provided the cover photos for Radiolandia, Argentina’s most famous show business magazine, and worked regularly for almost every other major entertainment publication in the country. Her subjects included the 20-year-old actress Eva Duarte, who went on to become First Lady of Argentina Eva Perón; American singer and civil rights activist Marian Anderson; writers Pablo Neruda and Jorge Luis Borges; ballet dancers Anthony Tudor and Serge Lifar; and prominent South American celebrities Tita Merello and Carmen Miranda.

Heinrich’s work as a celebrity portraitist and professional photographer is supplemented by an extraordinary series, Desnudos (Nudes), which she began as early as 1934. Heinrich’s nudes demonstrate not only her thoroughly modern understanding of the female form, but also her technical mastery and attention to light. Rarely exhibited during her lifetime, these photographs are all the more remarkable for having been produced in almost total isolation from emerging trends in nude photography in Europe.

Throughout her life, Heinrich was deeply involved in avant-garde circles both in Argentina and abroad. She served as a founding member of the Foto Club Argentino, the Argentine Council on Photography, and the Latin American Council on Photography, and was a prominent member of the photoclub La Carpeta de los Diez (Group of 10). She also served as an academic on Argentina’s National Committee for Culture. During the 1940s, she was active in the antiwar movement, and in the 1950s, she travelled to Europe, where her work was exhibited in Rome, Milan, Paris, Zürich and Cologne.