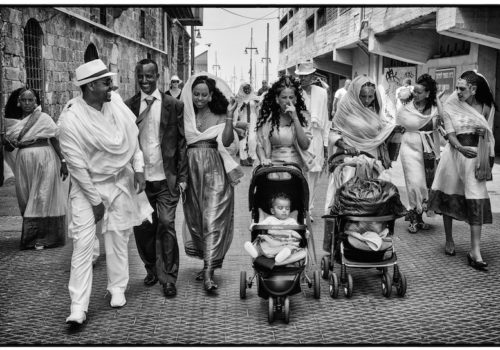 “A town forever kissed by the sea will never be contained. No border can confine her, or restrain her or bar her. No border can suppress her or make her disappear, forgotten by history. She is rebellious and beautiful; yielding but also spirited. She is as strong as the sea, sustained by its strength. She has seen so many sunsets, she is no longer afraid of the dark – long and chilling as that may be. She knows the light is stronger and it will find its way back to the sky like waves coming back to the shore. This is my Jaffa.” Asma Agbarieh-Zahalka.

Israeli photographer Nathan Miller lived in close proximity to the port city of Jaffa for more than 20 years. As a young man in Tel Aviv, Miller rarely gave this ancient city a thought; he was more interested in seeing the world, than exploring his own backyard and spent years traveling the globe photographing cultural histories before ending up in Australia where he now lives.

As is often the case when it comes to creative projects, Miller’s ‘Somewhere in Jaffa’ began completely by chance. On a trip to Israel fate played its hand. Unable to find accommodation in Tel Aviv, Miller bedded down in Jaffa for the first time. “Suddenly a new world opened up to me and I fell in love,” he states.

Jaffa is one of the world’s oldest cities, and perhaps the oldest port city. It is a cultural melting pot with a population of around 46,000 – Jews, Christians and Muslims – all living together, all citizens of Israel. So it is not surprising when Miller says, “Jaffa is a place of contradictions”.

This town is bristling and bustling with life, but while Miller’s photographs create a lively palette with which to picture the city, they also hint at a political undercurrent in Jaffa. Here the inequitable division in wealth is profound and the cause of community unrest, a subject addressed in the book’s essay by social and political activist Asma Agbarieh-Zahalka. It is her hope that Miller’s book, which she describes as “an honest record of a difficult period in the life of a town struggling to maintain her dignity and her charm” will create greater understanding towards Agbarieh-Zahalka’s hometown of Jaffa.

And Jaffa has many stories to tell. Here polar opposites exist side by side – religion, politics, culture – in an unlikely mix of “ethnicity, tradition, the old and the modern” says Miller who immersed himself in the local scene over multiple visits. Miller found the locals outspoken, but also incredibly hospitable and welcoming. On many occasions a chance meeting in a café would result in Miller being invited back to homes to share meals with families. He says there are few places in the world where this would happen once let alone numerous times.

It is Miller’s easy interaction with his subjects, in private homes and public spaces that make his black and white photographs so engaging. In true street photography style Miller has captured moments as they happen, simple scenes that tell stories rich in history bringing to life the personalities of Jaffa.

“Somewhere in Jaffa” is beautifully designed and printed. Miller’s thoughtful prose and his strong, intuitive compositions allow the reader to walk the streets of this port city and indulge the senses. Here the smell of coffee is interlaced with salty air. Exotic spices waft from street vendors’ food stalls to mingle with the heat of the day, and the grit of sandy dust. In these photographs one can hear the cacophony of animals, people, and vehicles in the coming together of life. Tales both old and new are etched in the city’s ancient walls and stone pathways and into the faces of its residents.

Today Jaffa is part of the sprawling cosmopolitan city of Tel Aviv. Yet Miller says “Jaffa has lost none of its own genuine vibrant spirit…it is the place that gives spice and extra flavour to Tel Aviv”.