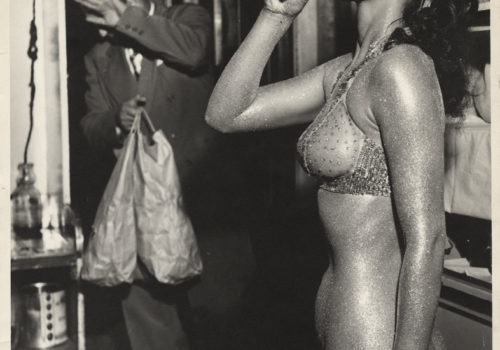 In 1946, the tabloid photographer known as Weegee left New York for Los Angeles, abandoning the macabre crimes scenes for Hollywood celebrities and riff-raff. The city liberated his vision, which could be as bitter as it was twisted.

Weegee is most known for his photographs of New York nightlife. He made his name shooting the sordid and tragic scenes of the city’s streets, cabarets, restaurants and shelters: crimes, accidents, drowning victims, fires. His photos made all the papers ,(except the New York Times, whose editors refused to publish him for years) and this would give birth to his first book, Naked City, published in 1945.

Attracted by the the Hollywood elite and the fast crowd that hovered around it, Weegee left for Los Angeles right after the war, taking his notoriety with him. He stayed there for four years, training his camera on the stars and starlets, extras, groupies, music hall dancers and models, all with his typical indifference to class and status. He dubbed Los Angeles, “Newark, New Jersey, with palm trees,” and “land of the zombies”

The photographer also found a new style in Hollywood. He began to include himself in his pictures and to develop experimental images with kaleidoscopic effects reminiscent of plastic toy cameras. “Now I can finally photograph the subjects I love,” he said. “I feel free.” It was a freedom he exercised on the likes of Marilyn Monroe, Judy Garland and Marlene Dietrich, distorting their features until they looked like some creature out of a David Lynch film.

But his acidic vision of the citadel of American cinema also includes its sunny streets, skies reflected on Cadillacs, and the buildings he so loved to disfigure. In the 150 photographs found in Naked Hollywood, we see plenty of unknown faces, their eyes open wide and fixed on the screen at a movie premiere, court scenes, and others tinged with his inimitable humor. There are a few bare-skinned bodies, too, but these are alive and well. After spending a decade tracking death and destruction across New York, Weegee discovered in Los Angeles the joys of a grotesque, good-natured kind of photography.