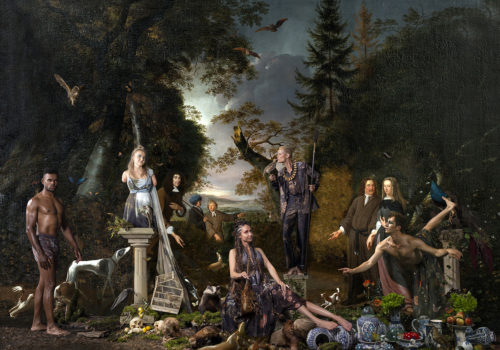 Museum Flehite in Amersfoort, the Netherlands, presents the first large retrospective exhibition of the Dutch master painter Mathias Withoos. The 17th century painter is renowned internationally for the dramatic, caravaggian light in his panoramic townscapes and detailed still lifes. The exhibition ‘A different Light on Withoos – Three generations Withoos’ shows ninety Withoos creations; of father Mathias, his children and of the contemporary photographer and descendant Hans Withoos.

Mathias Withoos is the most famous Amersfoort painter from the latter part of the seventeenth century. The multi-layered exhibition gives a representative overview of the impressive body of work by Mathias Withoos and an impression of the work of his painting children. Hans Withoos’ photographic works interact with the paintings.

In the series ‘Withoos meets Withoos, The People’ photographer Hans Withoos gives a new interpretation to the paintings of his distant ancestor Mathias, adding to them people and life. He combines the still lifes and town views with contemporary, surrealistic images, shedding a different light on transience. In his colourful work diversity and inclusivity play a prominent part. The textiles designed by him personally are based on the work of his ancestors and incorporated in the clothing of the models.

Hans Withoos (1962, Son en Breugel, the Netherlands) studied textile design and photography at the Academie voor Beeldende Vorming (Academy of Visual Arts) in Tilburg. He has been a photographer for more than thirty years and exhibits frequently and internationally. As a visual artist, he’s a romanticist and a storyteller, deeply fascinated by beauty in all its forms. His photographic paintings testify to the aesthetics of alienation.

The exhibition is documented in an extensive monograph and oeuvre catalogue of Withoos’ work, compiled by guest curator and Mathias Withoos expert Albert Boersma. Also a catalogue with photographic work by Hans Withoos is being published.

3811 BC Amersfoort, The Netherlands