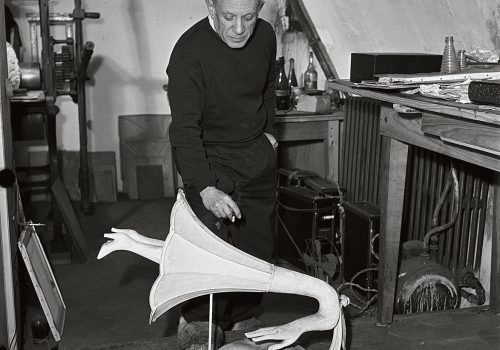 In January-February 1938, during the famous Exposition internationale du surréalisme at the Galerie Beaux-Arts in Paris, Óscar Domínguez’s phonograph Jamais (Never) caused as much of a sensation as Salvador Dalí’s Taxi pluvieux (Rain Taxi) or the 1,200 coal sacks hung from the ceiling of the main hall. Although we were convinced that the Surrealist object Jamais had been lost, it has just been discovered that the Canarian painter had given it to his friend Pablo Picasso around 1945. It has been tracked down thanks to a 1947 photo-essay made by Nick de Morgoli in the Paris studio of the painter of Guernica.

The object Jamais makes its reappearance in July 2020 at the Museu Picasso in Barcelona as a gem. Its resurrection is also an opportunity to reencounter the atmosphere of the astonishingly innovative Exposition of 1938 and to evoke the performance by the ‘Surrealist dancer’ Hélène Vanel on the night of the opening.

Described as a ‘Surrealist dancer’ in the Abridged Dictionary of Surrealism, Hélène Vanel was also known as ‘The Iris of the Mists’. Born in Vitry-le-François in 1898, she enrolled in the Margaret Morris School in London, where she met Loïs Hutton, who was to be for many years her partner. During the summer of 1923, the Margaret Morris dance company ran a summer school at Cap d’Antibes, and Pablo Picasso saw a children’s dance session on La Garoupe beach led by Hélène Vanel. On July 27, in the gardens of the Hôtel du Cap, he attended a show staged in which Hélène performed, with two partners, a dance of her own, Magnolia. The following year, Hutton and Vanel, who wanted to link dance and painting, costume and poetry, founded their own school, Rythme et couleur, in Saint-Paul-de-Vence.

The invitation card of the 1938 Exposition internationale du surréalisme announced three dances by Hélène Vanel: L’Hystérie (Hysteria), Le Trèfle incarnat (The Crimson Clover) and L’Acte manqué (The Missed Act). A virtuosa of appearances in semi-darkness and a phonograph fanatic, her dances amazed the audience gathered in the great hall. Half naked, lit by flashlights and a brazier, she gave a performance in keeping with her wild, unrestrained, sacred sensuality. She danced on a bed, shook the pillows, plunged into a little pool, splashed the guests — just like the dancer swallowed by the horn of the Jamais phonograph.