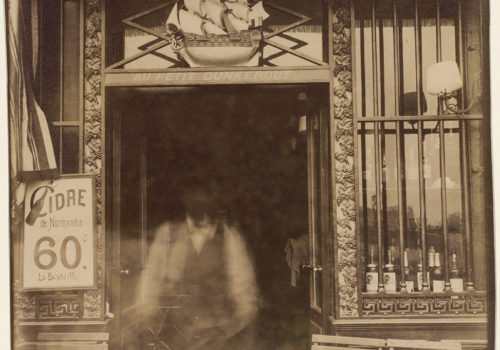 From its inception in 1864, the Central Union of Fine Arts Applied to Industry – now Les Arts Décoratifs – envisaged photography as an ” art applied to education and popularization “. It is therefore considered to be one of the most effective vectors for inspiring workers and artisans in the midst of artistic and economic emulation.

At the time of the first industrial art exhibitions, the institution produced its own photographs thanks to the laboratory that was set up in 1883 and called on photographers to join its ranks in order to provide models, in order to train the gaze and educate through images. Over time, the museum and its library acquired thousands of photographs intended to document the collections and the pictures some of the creators like the Fouquet house or Louis Sognot gave them.

Beyond the collections, it was a whole policy of exhibitions that photography nourished throughout the twentieth century, such as the “Exhibition of photographs of war “in 1916 or the” International Exhibition of Contemporary Photography “in 1936.

The programming of the museum offered and hosted the first French retrospectives devoted to Henri Cartier-Bresson (1955) or Jacques Henri Lartigue (1975). In 2021, the museum pays a new tribute to photography, but this time through the prism of its own collection. Six sections allow us to grasp its richness and variety: the quest for models, the views of countries as object of study and inspiration, photography in the service of heritage, the commercial utility of photography exploited by the press. and advertising, photography recognition and fashion photography.

The journey starts at the beginning of the history of photography in the furrow of the first associations and institutions: the French Society of Photography was founded in 1854 and the Chambre Syndicale de la Photographie in 1862. This part introduces the visitor to the first images from the middle of the nineteenth century by recalling their educational vocation for artists and craftsmen. The acquisition of photographic models – still lifes but also ornaments or figures – is therefore at the heart of the imperatives of the institutions.

The nineteenth century is also a time of exchange and movement.

Universal exhibitions, more particularly from 1867, invited you to discover the world, this “elsewhere” that was then overlooked, and photography contributed to this phenomenon. Pictures taken abroad have fueled the imagination of artists and decorators, as well as that of collectors. From South America to Asia via Europe and the Mediterranean, the photographs bear witness to different points of view: colonial, tourist, ethnographic or personal. Photography is also one of the resources most called upon at a time when the protection of monuments is organized.

The exhibition takes the visitor to the years 1920-1930, that see the gradual emergence of advertising photography. This part reveals how the rise of photographic modernism owes as much to the photographers themselves as to the graphic designers, editors and decorators, who bring photography into the realms of everyday life. The International Exhibition of Decorative Arts and modern industries, held in Paris in 1925, is fundamental to the photography market and publishing. Some magazines such as Art and Decoration or L’Architecture d’Aujourd’hui, and Connaissance des arts subsequently, are increasingly focusing on photographic illustration. Published in these magazines, the photos of Thérèse Bonney, Dora Kallmus and Jean Collas also play a role in the distributions of models, contributing to the renewal of creation and the evolution of tastes.

This is also the ambition of the Union française des arts du costume (UFAC), created in 1948, under the impetus of François Boucher, which brings together a prestigious collection of fashion pieces, textiles and prints, the management of which is then entrusted to the museum.

The alliance of these two collections, the agreement of which was sealed in 1981, becomes the fashion base of the Decorative Arts Museum. The photographic corpus brings an artistic and intimate testimony of the most outstanding figures of the Parisian haute couture: Charles Frederick Worth, Madeleine Vionnet, Paul Poiret … Creators that the very recent exhibitions “Harpers Bazaar. Premier Fashion Magazine “and” The Unreserved Drawing “brought to light.

“Histoires de photographies” is part of a program initiated in 2020 with “The drawing without reserve”, following “Faire le mur. Four centuries of wallpapers “in 2016, which aims to show the public all the wealth of the collections that have long remained in the shadows. The exhibition reveals the contours of a medium in its own right, its founding personalities and its most surprising expressions.