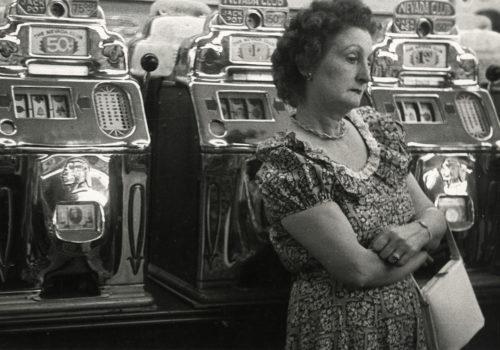 After the exhibitions devoted to Joel Meyerowitz (January 2008), Fred Baldwin and Wendy Watriss (September 2009), Duane Michals (May 2009), Leonard Freed (January 2011), Gary Winogrand (December 2014), Weegee (May 2016), Harry Callahan (May 2017), Robert Frank (September 2018) and Joel-Peter Witkin (2021), with Lisette Model the Museum of Photography is continuing its cycle of presenting major figures of American photography, in close conjunction with its permanent collection.

Through her photography, Lisette Model’s work reflects a social, documentary and resolutely modern vision of image-making with its dynamism and the originality of her compositions. Lisette Model redefined an approach to documentary photography, shedding the classical strand and offering subjective portraits which, still today, influence a substantial part of photography. Her approach is a dizzy experience confronting reality with her own perception of the world, resorting willingly to the flash and shooting from a low angle. Likewise, Lisette Model’s framing and cropping manipulate the image, offering a dramatic or even expressionist aspect.

Lisette Model also imposed herself as a woman in a still mostly male world. Creating, as a teacher, a female artistic lineage with, in particular, Diane Arbus and Eva Rubinstein (daughter of Arthur Rubinstein, the pianist), she consequently formed, with her friend Berenice Abbott, the first feminine movement of American photography of her time.

The Lisette Model exhibition presents a set of 150 works evoking each of her iconic series: from the Promenade des Anglais in Nice, including tramps sleeping on sidewalks in Paris, superimposed reflections in shopwindows, pictures of legs captured from a New York subway entrance, but also prostitutes, drag queens or jazz club singers. The Lisette Model exhibition offers a unique vision – the most comprehensive ever presented in Belgium – of the photographer’s work.

Lisette Model was born in Vienna in 1901 and died in New York in 1983. As a renowned photographer and an eminent teacher, she was going to put her own personal mark on the history of the photographic medium. Before learning photography, Lisette Model began her creative life as a student of music, studying piano and singing. At the age of thirty, she shifted away from that path, in the direction of photography. Rogi André, first wife of André Kertész, and the photographer Florence Henri, gave her initial lessons in photography.

In 1934, she did a photographic report on the Promenade des Anglais in Nice. This intentionally satirical series was published the following year in Regards, a French magazine with communist leanings. As Fascism progressed in Europe, Lisette Model left for the United States with her painter husband, Evsa Model. In New York, they were introduced to avant-garde circles by Alexey Brodovitch, a photographer and graphic designer, artistic director of the magazine Harper’s Bazaar, and by the photographer Ralph Steiner. Lisette Model then met Berenice Abbott, Beaumont Newhall, curator at the Museum of Modern Art, New York, and Ansel Adams.

In 1940, the MoMA purchased several of her photographs and Lisette Model was presented in the group exhibition Sixty Photographs: A Survey of Camera Esthetics. Her first solo exhibitions were organised in New York the following year. That same year, 1941, she became a member of the Photo League, a group of photographers intending to reflect workers’ social conditions and American economic reality. Lisette Model regularly collaborated with the magazine Weekly. In 1942, after an assignment from the magazine Harper’s Bazaar, she produced the reportage on Coney Island in which a famous and one of her most iconic photos represents a bather. In 1943, Lisette met Edward Steichen, who served as MoMA’s Director of the Department of Photography at that time. Throughout the 1940s, she produced various photographic series which were published in magazines.