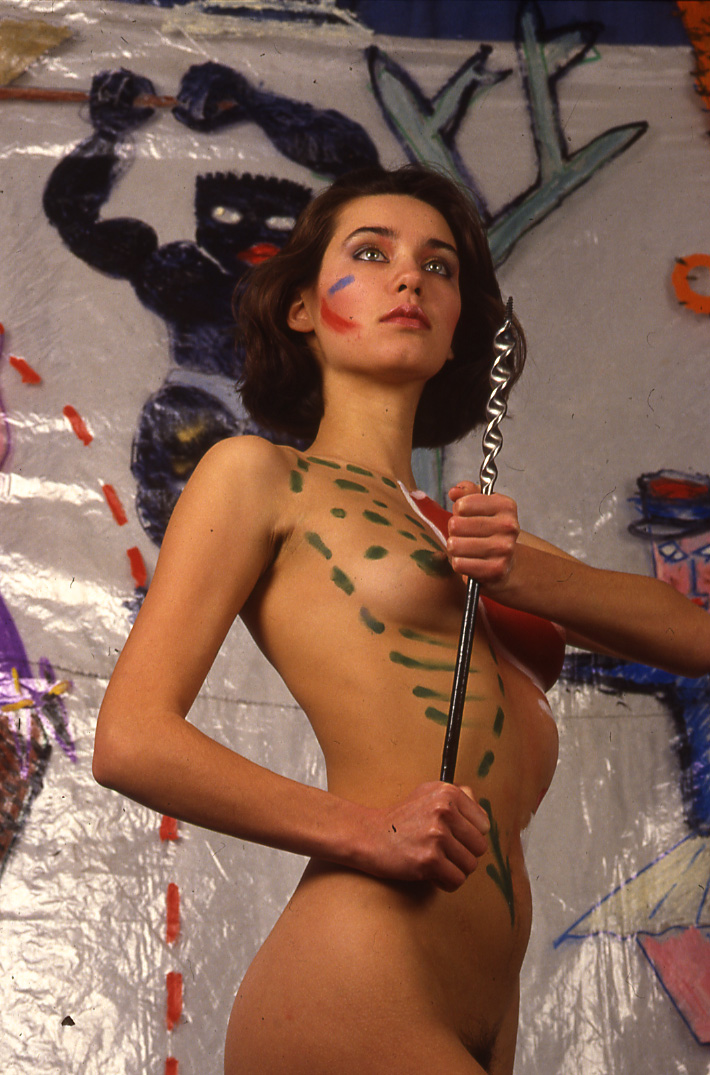 This smiling, bearded man with round glasses you see was once a fixture at some of the wildest parties of the 1980s. That was where he took some of his best pictures, and where met everyone who matters in the contemporary Russian art scene, from eccentric artists to beautiful models. No question about it: he likes nudity, from adventurous young girls to political bigwigs like Edouard Limonov.
Naturally, Limonov (1994) is one of the most surprising pieces of the exhibition. Standing on a window ledge, the extremist wears nothing but a grenade. It helps to know that Limonov is pen name of Edik Savenko, a name chose for its proximity to “Limonka,” Russian slang for grenade. Limonov (never one to shy away from cameras, no matter how dismal his political career gets) came to the exhibition opening with his old friend Borisov. A few of Borisov’s models, like Timour Novikov, are no longer with us, having lived their lives, as it were, to their fullest. Others are now stars of the contemporary art world, like Iossif Backstein, Sergueï ‘Afrika’ Bougaïev and Vladik Monroe. It’s like a nude Who’s Who of the seedy Saint Petersburg and Moscow underworlds. You get the feeling that not a few of the photo shoots wrapped up with an orgy.

It’s difficult to discern a unified style in Borisov’s work, except a certain carpe diem spirit that he still exhibits, even though he claims that “models today don’t have the sparkle they used to.” As the age difference between the maestro and the nymphets increases, the eroticism endures. Sometimes color explodes through the mainly black-and-white images. Borisov could sometimes pass for an antiquated classicist (three nudes) or a fantasist (nude with pterodactyl). At other times it’s pure Guignol (bodies caked in make-up, blue-collar bodybuilders). He thumbs his nose at Soviet symbols (two topless schoolgirls lifting up a tiny bust of Stalin) and the United States. In the absence of a unified style, he regales us with his genius for the absurd. He was always in the right spot at the right time, and with the right sense of humor.