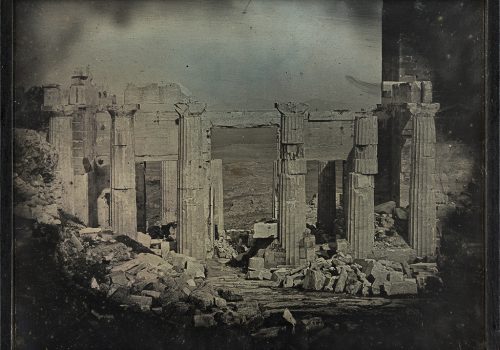 These few words from Sylvie Aubenas, director of the photography department from the Bibliothèque nationale on the news of the death of Daniel Wolf: “It’s really awful. His daguerreotypes by Girault de Prangey are hung in Orsay pending the opening of the exhibition … ”

The mastermind of this great achievement is Jeff Rosenheim, who has been interested in de Prangey since before he was named curator of the department a few years ago. He acquired initially a group of daguerreotypes in 2015 when the best of de Prangey’s work came to an  auction he attended with Stephen Pinson, a new curator at the Met, previously the curator of photography at the New York Public Library. The following year an acquisition was made from the family.  From these two acquisitions, Rosenheim and Pinson envisioned the idea an exhibition for which Rosenheim committed enormous resources and talent.

Everything about the exhibition and the catalog is at the highest level ever of curatorial excellence The design of the exhibition is well thought out, and it easy to view what are basically mirrors with images. The catalog is equally accomplished and allows the reader to discover for oneself the genius of this photographer. But who is de Prangey?

Photography was invented in England and France in 1839. de Prangey was a  single, wealthy  specialist in Islamic and Classic architecture, well published  and respected. He teaches himself the French invention, the daguerreotype, and in 1842 he begins the first of three trips around the Mediterranean (the last one in 1845), making 1000 images before Daguerre makes a few dozen and before Talbot publishes “The Pencil of Nature.” The significance of his work is both  the extraordinary reach of his subject matter, being the first to photograph most of the countries on the Mediterranean, and also  the first to really get what photography is and the paths it will follow for more than another century.He allows photography to be photography. The first 20 pictures he made were on his estate known as Les Tuaires, in Courcelles-Val-d’Esnoms, outside Langres, where he made abstractions of bare trees and rocks. The feeling is like Robert Adams. Without any precedence, he is the first to make photographs that embrace a new vocabulary:..horizontal panoramas, vertical panoramas, square pictures, street photography, snap shot, even though the exposures were quite long. Like no one else it this early period, he is the first to understand that photography is a document, that photography is art, and that photography is somewhere between the two.

Walking up the steps of the Metropolitan one sees an enormous banner for this exhibition. and somehow the power of the Met is all that is needed  to secure this artists place in the history of photography. Jeff Rosenheim and Stephen Pinson merit congratulations and thanks for presenting this extraordinary exhibition, and from one day to the next, changing the history of photography.