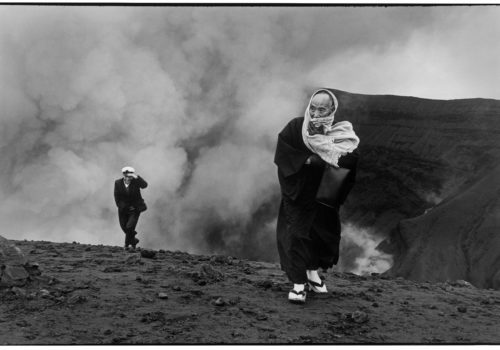 At the end of the 1970s, Henri Cartier-Bresson and his publisher Robert Delpire decided to produce a book and an exhibition which covered his entire career and which would take the name of “Henri Cartier-Bresson Photographer”. It is an undisputed reference in the career of the photographer who traveled the world with the sole obsession of concentrating in an image a feeling in relation to what he saw and a set of lines. Small and great history, portraits, landscapes: from his beginnings at the end of the 1920s with the surrealists in Paris, then Africa and Asia where he stayed for two years.

This set of 133 photographs concentrates the best of the work of the photographer, who at that time had decided to resume drawing and painting, his first love.

Through this corpus which brings together images taken between 1926 and 1978, the one that was often called “the eye of the century” presents to us his intimate vision of a world whose landscapes he had traveled and the actors: artists, writers, anonymous he had met, but also urban or bucolic landscapes, not to mention the vagaries of unavoidable historical events that he had witnessed.

He selected all the pictures, and supervised the production of silver prints at the Picto laboratory in Paris, and the HCB Foundation is the custodian.

This exceptional set has been carefully preserved and is only shown in places where the presentation conditions are optimal. The exhibition, Henri Cartier-Bresson’s first on the African continent, is not designed chronologically but rather in a sensitive way, bringing together images in an intuitive and formal way. Some of these photographs, such as ” Near Gare Saint Lazare ” have become essential icons, studied in high schools, and are considered masterpieces of 20th century art.

“To photograph is to put your head, eye and heart on the same line of sight” Henri Cartier-Bresson (1908-2004)

Word from Mehdi Qotbi, President of the National Museum Foundation

A lover of painting and drawing, nothing predisposed Henri Cartier-Bresson to make photographs. And yet it was with this art, still new in his time, that he chose to express his intimate view of the world. What an astonishing destiny for the man who will become, in a few years, one of the most famous photographers of all generations.

At the National Museum Foundation, this year we are giving photography pride of place in our cultural program. It goes without saying that it was unthinkable for us to present big names in photography to the Moroccan public without dedicating an exhibition to Henri Cartier-Bresson.

On all fronts, armed with his camera, this pioneer of modern photojournalism succeeded in capturing the greatest moments of history, making him a privileged witness of the great events of the 20th century and its geopolitical upheavals, which earned him, the nickname “eye of the century” by Pierre Assouline.

Whether emblematic or little known, the photos of Henri Cartier-Bresson are a real lesson in life. A rich and committed life, full of freedoms and demands, a life with the great of this world, whom he was able to portray in his own way, like stolen moments.

I would like to thank the Henri Cartier-Bresson Foundation for its precious collaboration and for allowing us to host this traveling exhibition for the first time on the African continent, in Rabat, “City of Light and Capital of Culture”.

We are proud, at the National Museum Foundation, to be able to present it to the Mohammed VI Museum of Modern and Contemporary Art and to allow Moroccans to travel through the last century through the eyes of such a photographer.

I also thank the teams of the Mohammed VI Museum of Modern and Contemporary Art for their commitment to the success of this exhibition.

President of the National Museum Foundation