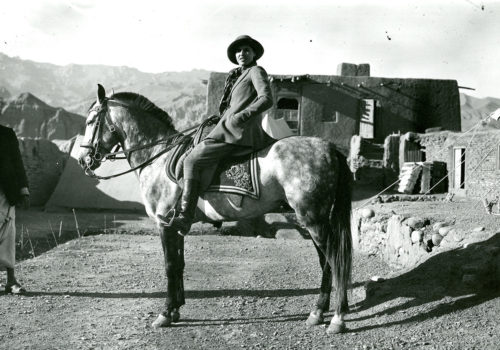 On March 11, 2001, the Taliban, who had taken power in Afghanistan, organized the destruction of two monumental Buddhas 38 and 55 m high, carved in the rocks of the high cliffs of Bamiyan. Works of universal value, witnesses of the extraordinary vitality of the Buddhist art in this valley, located on the Silk Road and open to all influences, Indian, Greek, Roman… Distributed by the Taliban, the images of the destruction circled the world, six months before the twin towers of the World Trade Center in New York.

These two events marked our entry into the 21st century. The attack on human memory, their heritage and the memory in which they take root, has since been recognized as a crime against humanity.

20 years later, the National Museum of Asian Arts – Guimet chose to commemorate the destruction of the Bamiyan site through an exhibition presenting major archaeological works found on this Afghan cliff. Photographs by visual artist Pascal Convert shed light on the richness of this heritage in a contemporary way.

The exhibition pays homage to Joseph and Ria Hackin, Bamiyan archaeologists and museum curators, who died 80 years ago.

The MNAGG will present a series of unique archaeological works found in this Afghan cliff, from Gandhara to the Islamic period. In particular, we will discover two hands of monumental Buddhas with remains of gold leaf preserved.

Accompanying these works, the photographs of Pascal Convert, including the Panoramic of the cliff of Bâmiyan and the Cave sanctuary of Bâmiyan destroyed by the Taliban, will offer a more contemporary look. Through archaeological remains, records of paintings and remains of original paintings, contemporary creations by Pascal Convert, films and presentations of archival documents (excavation documents, rallying letter from the Hackins to General de Gaulle), The exhibition tells the story of the Bamiyan site and its cultural vitality from the 6th to the 13th century, the doctrinal basis which led to the destruction of the site in 2001 but also the terrible news of the events with the destruction of other sites registered in the heritage of humanity.

All the works will be installed on the first floor of the museum, in the Sino-Tibetan room set up for the occasion.

Pierre Cambon, chief curator of the Korea, Pakistan and Afghanistan collections of the MNAAG