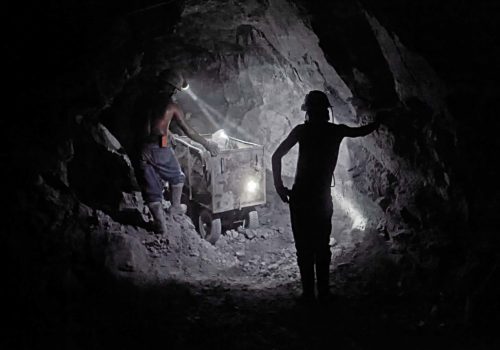 After spending more than 9 months with the miners of Potosi in Bolivia, Miquel Dewever-Plana has just published the book Potosí en sol mineur (Artem&Cetera/Blume), accompanied by an unpublished novel by Isabelle Fougère. From 1545 the Spanish conquistadors exploited for three centuries the Cerro Rico (“The Rich Mountain”), which became the largest silver mine in the world. The small hamlet, perched at an altitude of over 4,000 meters, built at the foot of this mountain, became in a few decades a city as big as London or Paris. Five centuries later, the mountain is still exploited by some thousands of peasants who have become miners, in extremely precarious working conditions, reminiscent of those in Zola’s Germinal. The two authors and the association Artem&Cetera have set up an economic model that allows them to dedicate the profits from the sale of the books to finance a free edition in Spanish for the miners of Potosi.

“I have wanted to return to Bolivia for more than 20 years to carry out a project on Potosí with the miners of “Cerro Rico” (The Rich Mountain). This mountain, which dominates the city of Potosí from the top of its splendour, was the largest silver mine in the world. It is and will remain the symbol of the plundering of natural resources, which Eduardo Galeano wrote about in his book Open Veins of Latin America. This story composes a new chapter of a project I’ve been carrying out for almost 25 years on this vast continent.

Located at an altitude of more than 4000 metres high, men and women, mostly Quechua peasants, have used up their short existence for five centuries to extract precious metal from the mountain’s belly. The suffering is such that I have seen their faces change until I no longer recognised them when they leave this underworld. Darkness, heat, dust, arsenic vapour, lack of oxygen under the earth for the men. Glaring sun, rain, wind and the cold that burns the eyes and skin on the arid mountain slopes for the women, who mine in the open air or work as mine guards. Despite the dangers and the disease, this is the only way for them to escape a destiny written in advance, inherited from birth from a land that no longer feeds them.

Emblematic of a world that no longer offers a place to the small ones, however valiant they may be, they nevertheless have the pride of belonging to a real corporation, united by numerous rituals and beliefs.

For nine months, I had the privilege of accompanying them and sharing their daily life at home, in the mines or in their home village, invited to share their rituals. Complicit, even demanding, they agreed to take me with them into the depths of the mountain. I think I have never suffered so much physically, and yet I savoured every moment spent in their company, because even if it poisons their health on a daily basis, the mine remains their domain of strong men. Cheeks swollen by coca leaves to silence the hunger and physical suffering, they continue to dig, ever further, in pursuit of the same dream, that of finding the much fantasised vein of silver that would end five centuries of misfortune. They wanted to show themselves as they are, as they do, in a burst of dignity, while every day the frail corridors they walk through threaten to collapse and bury them.

We discover, through photography and testimonies, the way they interpret the history of Potosi, from the arrival of the Spaniards to the present day. A very different vision from the official history.

The result is “Potosí en sol mineur”, a book written as a four-handed score: on the one hand, a photographic essay that recounts the edifying daily life of the miners of Potosí, and on the other, a novel by Isabelle Fougère in which, against a backdrop of social drama, she gives pride of place to the ancestral beliefs of the miners while placing their reality in the context of a globalised world given over to the law of the strongest. It is a “double book” of 336 pages, with two covers, which can be turned over to go from the photographic essay to the novel and from the novel to the photographic essay. Two autonomous stories that echo each other, from the most rigorously documentary reality to fiction with a more universal scope. It is always the same story, explored from two angles.

They wanted this book for themselves, for their children, but also for others, their neighbours, their country, and, even further, for us. This is why, as with each of my editorial projects, I wanted a free Spanish edition of this book to be destined to these men and women of Cerro Rico. It is in this exchange that my work as a photojournalist takes on its full meaning. This is why this book can only be purchased through the “Helloasso” platform. The profits from each book sold will allow us to finance a copy for the miners of Potosí.  In total, 500 copies will be distributed to the families of miners in Potosí.”

The book Potosí in G minor is available on Hello Asso.
336 pages, 42 € (or more, depending on your donation).
One book purchased = one book given to the miners of Potosí.

“During all my years of collaboration with photographers, and in particular within the Editing agency, I was always frustrated to see that there was no space available to publish what they told us when they returned from their reportages. The press used their images, sometimes respected their captions, but rarely exploited the information collected by these men and women who have no choice but to get as close as possible to those who are living the world’s upheavals. Each reportage is a collection of precious information but also an experience and an adventure which, combined, allow us to bring some answers to the question we share with Aragon: Is this how men live?

NewsFromPhotographers is part of the development of a proposal that I had already initiated and produced, for several years, under the title Temps de Pose f for Arte Reportage. The feedback from viewers was that they were pleased to learn new and complementary information on subjects that were sometimes widely covered by the mainstream media, and also that they were moved by the voices of the photographers and the power of their testimony.

The first interviews and short films we have made with Vartan Ohanian and the photographers Ulrich Lebeuf, Antoine Agoudjian and Miquel Dewevere-Plana come within the scope of this editorial line, combining a visual narrative with the voice of their authors. We do not impose on ourselves any constraint on the frequency of our publications but, naturally, we work on one or two subjects per month. The contributions of other independent photo editors, or those working in the media, who will propose and produce other subjects with us, will enable us to increase this rhythm and diversify our content, with the particular wish to reach young people in addition to those of all ages who remain curious about the future of mankind and attentive to our planet.

The second stage of this project, with the creation of a real online press site, which we are developing as a team with Xavier Gautruche, David Morel (a former photojournalist) and the Digital Cover agency, will soon enable us to combine these short films with podcasts of interviews and other historical and geopolitical contextualisation texts, as well as complementary, more committed contributions from relevant personalities concerned by the subjects dealt with.”