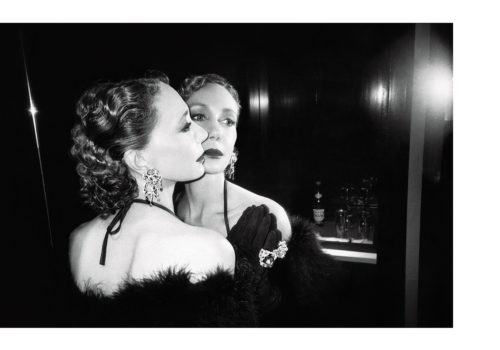 The Legend Marisa Berenson is a new book by Michel Haddi. He sent us the following essay.

My lady, milady, comtessa how should I address you? Or should I call you, Vittoria Marisa Schiaparelli Berenson of course not. As always, I will call you darling.

The first time I met Marisa was about 15 years ago through a mutual friend. I don’t remember everything, but I do remember having lunch with Marisa at the Café de Flore.

The great thing about our business is that it doesn’t matter if you are in Kuala Lumpur or Mombasa. If you want to know something about a photographer or an actor, you just need to call a friend of a friend of that person and you will know in 2 seconds the truth of them. Anyway, my friend David Croland, who is a particularly good friend of Marisa, gave me the seal of approval and Marisa, although being very shy had total confidence in me.

I could not stop looking at Marisa. I knew her story but still I was fascinated to have in front of me Lady Lyndon, from the great film, Barry Lyndon, of Stanley Kubrick fame.

I know Marisa is bored with the past. Meeting people who come up always with the same things. The interviewer might say:

So you worked with some of the greatest directors in the world, Stanley Kubrick in Barry Lyndon, Bob Fosse in cabaret or Visconti in Death in Venice.

Can you tell us how … blah blah etc etc …

Marisa is a woman of the future. She is wholly interested in working on the next project. We did many photo shoots together, and we had a blast. I went to see her in a play, Berlin Kabarett directed by Stephan Druet where she leads one of the great Berlin cabarets during the Weimar Republic. The play is a success, a true-blue Berlin revue, the true Kabarett.

Anyway let’s come back to Barry Lyndon. When I saw the movie, on the day it was released at exactly 2:30pm in the now defunct cinema on top of Rue de Rennes in Paris, I could not believe the beauty of Lady Lyndon. When it first came out, the movie was not a commercial success but for millions of movie buffs around the world this film is one of the greatest. This is how you build a legend. Marisa became a legend.

Now whatever she does as a model or as an actress she is always there, working on the best ventures.

I suppose an apple doesn’t fall far from the tree. Her grandmother – Elsa Schiaparelli – is the iconic fashion designer. It’s pretty obvious that in her veins run the blood of a dynasty.

We do share very similar values. Spirituality is one of them. She spent time in an ashram in India doing transcendental meditation. And family is another. I had the pleasure of spending time with her daughter, Starlite and hope soon to meet her granddaughter, Luna.

As a photographer I have been very much inspired by her work and a lot of shoots I did for various magazines have a flavour of her.

As far as I am concerned she deserve the label of being a legend.

She is a legend now and will be for years and years.

Pre-orders are now open for The Legend Marisa Berenson.

A limited edition of 500 will be printed. Each copy will be number and signed.  The book will be released worldwide on the 5th of October 2021 for Paris fashion week.

This 45x30cm full-bleed book, containing 40 pages of magnificent images, produced in black and white, 4-colour throughout. Sporting a front cover of 350-gram Galerie Art Gloss laminated paper, the inner pages of text are printed on 300-gram Galerie Art gloss paper. No expense has been spared here when only the best will do for ‘The Legend’. Each copy will be hand-signed by Michel Haddi, shrink-wrapped, and numbered from 1 – 500. The book is designed by creative director, Roberto Da Pozzo.  The cost is £300, plus postage

The signed book and a signed print

A limited edition of 50 books will be presented in a black box with a 24x30cm (11x14in) print inside.  The print will also be hand-signed and numbered.  The cost is £1000, plus postage.