Marion Gronier : We Were Never Meant To Survive 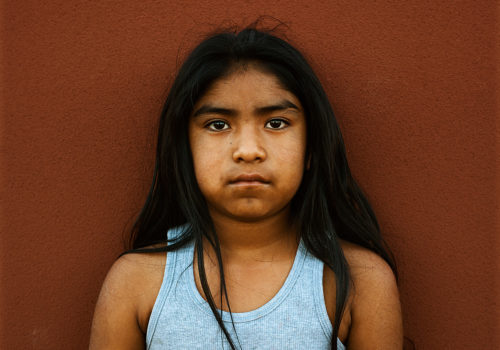 Marion Grenier‘s book, “We Were Never Meant To Survive” is available in bookstores since October 1st.

In photographing Native Americans, Mennonites, and African Americans, I sought to identify the faces of the peoples who founded the United States of America.

The faces that held me back seemed to me marked by a tragedy much older than them, as if the tidal waves of the original violence that haunt the history of this country, that of the extermination of “ Indians ”and the slavery of“ Blacks ”.

This violence was instituted in American society by a separation and hierarchy of races, it is now systemic.

During this work, I realized that the photographic portrait had been an instrument of this violence. In the 19th century, when colonization was in full swing, photography participated in the subjugation of indigenous or dissident populations. Used by positivist scientists of the time, it was the cornerstone of a system for classifying races. The faces, measured and categorized, proved the atavistic inferiority of their owner. These so-called scientific demonstrations were based on racist assumptions. The photograph itself does not attest to this. However, its apparent objectivity, inherited from its mechanical origin and its index nature, had the power to naturalize these prejudices.

I chose to re-stage this typology in order to deconstruct it, to show how much, unlike this fictitious assignment, the photographed face vibrates, vacillates, shimmers, how much it escapes us in an incessant back and forth between exhibition and withdrawal, how much it plunges us into the unknown, how much it resists.

Because these faces resisted me, resists us, from this resistance consubstantial to their appearance of which Emmanuel Levinas speaks, this paradoxical and indestructible force that emanates from their vulnerability.

This work, ultimately, perhaps seeks to reconfigure the past, to offer another story. By exhibiting the violence of colonial history, dismantling and diverting some of its weapons, my images want to show the unwavering resistance of oppressed peoples.

The standard edition: a book for 38 €

The leading edition: a book accompanied by a signed print in a limited edition of 10 for 300 €

All copies will be signed and autographed unless you are contraindicated.