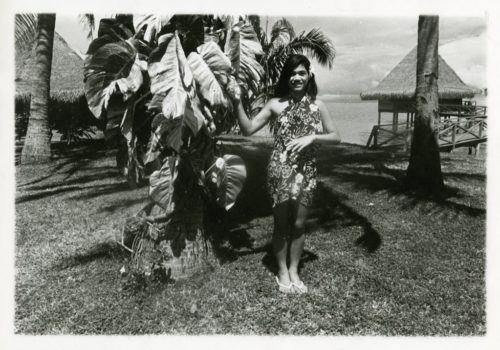 Most people familiar with the art of Marcia Resnick know it through Re-visions, her series of smart and very funny photographs tracking the passage of a pre- adolescent girl into young womanhood and her late-1970s/early-1980s portraits of Bad Boys – the musicians, artists and writers of New York City’s “downtown” scene.

A new exhibition at Deborah Bell Photographs opening this week features Resnick’s early photographs, made soon after her graduation from Cal Arts, when she pursued a much wider-ranging exploration of the inherent, and often humorous, contradictions between art and reality.

Engaging with the idea of the artist’s book, she embarked in 1974 on a series of photographs called See – “photographs of people photographing places.” In an interview with Alex Sweetman at the School of the Art Institute of Chicago in 1978, published in Exposure (16:2), she said:

“I found that when I went to tourist spots, there would be people looking at places and they’d always get in the way and I’d always  see them from behind. That was the whole [Maurice] Merleau-Ponty kind of philosophical thing: being in front and being behind – like being inside yourself. I was interested also at that time in the iconography of body gestures. How you could read, from the way a person’s body was from the back, almost as much, or as much, as you could from looking at a face in a portrait.“

In her now-classic 1974 series See Changes, using one photograph from See, Resnick shows her Cal Arts classmate James Welling perched on the edge of the Grand Canyon and, by manipulating and altering the photograph with paint, pencil and collage in numerous variations, continues to explore her earliest interest in the nature and presence of the photographic print.

Tahitian Eve (1975) became her “statement about art history and also body gesture – the way Gauguin made all his Tahitian women stand in these absurd positions that were very awkward.”

She dove into the nature of landscape photography and photographic “reality” in her next two projects. Landscape (1975) melds an “incredible elaboration of nothing… my statement about Minimalist art” with a sardonic take on the cliché of the beautifully photographed landscape. For Landscape/Loftscape (1976), she has explained:

“I had all these landscape images in my house, and I was stuck in New York, so I started to recreate the landscapes in miniature and photograph them, so that they would look just like the original photographs of landscapes. It’s a comment on photography and how it flattens dimensions and how a photograph isn’t really the thing itself. A photograph of  Texas isn’t Texas. A re-creation of Texas is just as much Texas as the photograph of Texas.”

Like her friend Wegman, who was creating conceptual tableaux in his photography during the mid- late-1970s, Resnick was a precursor of photographic storytelling that flourished, and varied widely in intent, in the work of a broad range of artists from Duane Michals to Cindy Sherman.

Resnick was included in 1975, along with John Baldessari, Thomas Barrow, Michael Bishop, Richard Schaeffer and William Wegman, in the ground-breaking exhibition The Extended Document: An Investigation of Information and Evidence in Photographs at The George Eastman House.

Following the notoriety she received for her work in the Eastman House exhibition, Resnick’s book Re-visions was released in 1978 to further critical acclaim from her artistic and literary peers, among them William Burroughs, Andy Warhol and Allen Ginsberg.