Marcelo Brodsky :“We are all Migrants” 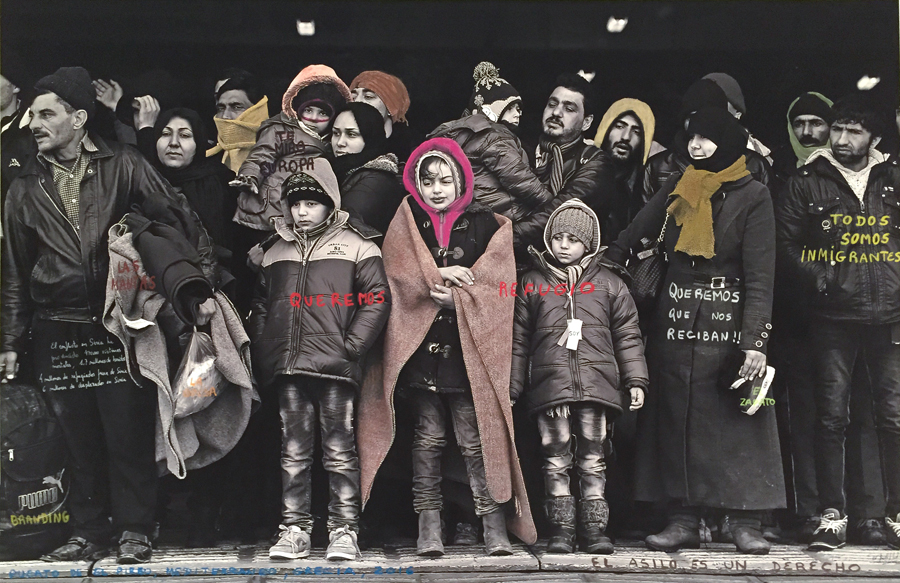 Marcelo Brodsky is best known in France for his work Buena Memoria (Good Memory), which he had shown as part of the América Latina exhibition at the Fondation Cartier in 2013. He showed a large reproduction of his class photo on which he had written, years later and after the Argentinian dictatorship, annotations on the fate of his classmates after he had searched for them – many of them had not survived the years of the country’s dictatorship. We met a committed photographer and artist who believes in the power of the image, on the occasion of his exhibition at the Museu da Imagem e do Som in São Paulo.

An exhibition of your work, titled Migrações (Migrations), curated by Priscila Arantes of Paço das Artes has just been inaugurated at the Imagem e do Som à São Paulo. Can you tell me about the exhibition?

The exhibition is divided into three main parts that represent three different migratory flows: the first tells the story of my grandparents, all four of whom immigrated from Russia to Argentina (one of my grandmothers was born on the ship bringing her family to Latin America). I’ve made interventions and written on the images of that time that I recovered, of their journey by sea and of their arrival in Argentina. In this first part, I identify myself as the grandson of migrants. In the second part of the exhibition, I’m showing images from my work titled Nexo (link), which I created in 2001 from images made during my years of exile in Barcelona when I fled the dictatorship in Argentina. There, it’s me who’s the migrant. Finally, in the third part, I show images made from photographs of the migrant stream that is currently taking place in the Mediterranean region. I’ve made some artistic interventions to these images to give them a new meaning.

Were these images of migrants in the Mediterranean from the press?

They were from photo libraries. I, myself, set up an photo library, called Latinstock, almost 30 years ago now, which  also represented Magnum , and was present throughout Latin America as well as in Spain. Managing a photo library gave me the key to understanding the way we can work with these images. And using these types of photographs, which are a sort of “contemporary archive” in contemporary art, is, I believe, fairly new. I produced these works in collaboration with the EFE image library and according to the agreements we have in place: their credit and also that of the photographer are present when I show the work, the images are  high resolution. These photographs suffer from a context displacement: I take an image intended for the news and put it into the art or culture sector. When you see these images in the press, you turn the page, and  don’t pay attention  any more . The fact of taking them out of their context, and of intervening on these images, changes the point of the photo, the initial view is dislocated. That allows me to give the photographs a new presence and they acquire a new power.

Why did you create, in this exhibition, this parallel between three periods, three territories and three different flows? The places, the origins of the migrants and the periods change but the history always seems to be the same, is this inevitable?

Yes, history is destined to repeat itself. I created these images in order not to make the same mistakes. Because we are all migrants. I come from a country, Argentina, shaped by thousands of European migrants, and, more widely, from a continent where migrants have played a central role. A moral question arises, and connects this history of the continent to that which is happening at the moment in Europe: If Argentina was capable of receiving 5 million migrants from Europe, I find it interesting to compare this story to the situation of Europe and its rejection in the face of the current migrations. I propose that we should accept more migrants, even here in Latin America, we have the space. I don’t want to have to retreat from this matter, which concerns me greatly. I want to connect the large and small stories. That’s the way I work. And I’m convinced that migrants can bring great things to our society. Elsewhere I am in the process of producing a piece that consists of a wooden boat, filled with earth and in which the migrants will be represented by the flowers that grow there. I see migrants like that, as possibilities, like the flowers that can grow on the other side of the sea or the frontier they are crossing.

It seems that you are justifiably seeking to erase the frontiers, geographic and material, when you mix different stories of migration, and then those between the various forms of diffusion of an image, by hybridizing them, as you do, for example, between art and the press?

Yes, it’s a bit like that. But also, I like my works to have different meanings in the reading. In theMigrações exhibition, there are always three of four meanings that are interconnected and reinforce thinking about it. The Buena Memória (Good Memory) work, my photo of my middle-school class in which I made interventions after having researched the current lives of my classmates, contains many possible interpretations. Already in the title, then thanks to the writing on the photographs and finally as a function of the history of the place and the context in which I show it. There are always several layers of reading which are interpreted differently dependant on the public who view it. I like to make a connection between the different strata of use of  images. Press images create a certain distance, while art allows the transmission of things in a more personal way and without limits. Art especially allows my work to go on talking about the subject of migration without my having to repeat myself. Combining the things that interest me. Using what I learnt from the photo libraries,  the fact that I today  act in partnership with NGOs and in defence of human rights makes sense to me.

In addition to being an artist, you are committed to the defence of human rights, especially with the Visual Action organisation that you recently set up. Can you tell me about this facet of your work?

Visual Action’s mission is to work with NGOs that are working for the defence of human rights, and to educate them about the development of a visual language, so that they can use images as a tool for the defence, protection and promotion of human rights. The NGOs often have practices strongly related to policy, but little relationship to the visual. The organisation’s objectives are to reconnect art and human rights, to send the NGOs the information and the necessary codes, since learning the language of images is a necessity. The power of images is extraordinary! They function as data catalysts, allow denunciations and mobilisation. For example, we mounted a big campaign in solidarity with the victims of Ayotzinapa, the 43 students who disappeared in 2014 in Mexico, and called on students from the whole world to create images to combat this tragedy and make it visible. All the images were then shown in the Isidro Burgos school in Ayotzinapa, the disappeared students’ school, one year after they had been taken. The images have great power, but it’s necessary to know how to adjust that power, to direct it, in order that its objectives be positive, humanist.. For example, I think that we, photographers and artists of Latin America, made a mistake recently when we didn’t commit together to support the ‘Yes” vote for peace in Colombia. I think that we would have won if we had been united.

What are your projects now and in the future?

I’m  fully occupied with preparations for the Bogotá art fair where I’m going to show my intervention work on images of the revolts across the world in 1968. I’ll also show this work next year in Tlatelolco in México – exactly where the student massacre took place in 1968. And with Visual Action we are in the process of thinking about a project in line with the power of images in the favelas in Brazil… But I can’t say any more about it at the moment.