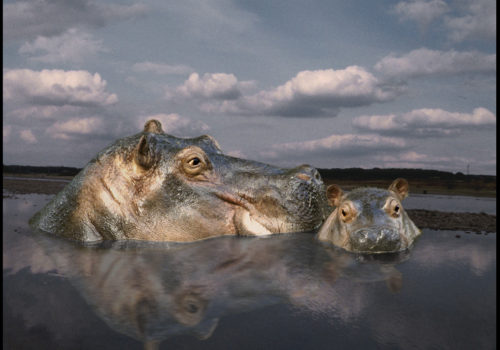 Last autumn Frank Horvat, a classic of world photography and great friend of MAMM, passed away at the age of 92… The maestro’s solo exhibition ‘House with Fifteen Keys’, shown at the festival of ‘Fashion and Style in Photography 2019’, was warmly received by the public and highly appreciated by critics. Frank Horvat came to the opening and was pleased to note that the exhibition was created exactly as he had imagined. Inspired by such a wonderful start, we made joint plans, in particular, in 2020 we dreamed of showing the unique photographic collection that Horvat had amassed throughout his life, but the pandemic delayed and changed everything, dividing everyone’s life into ‘before’ and ‘after’. The museum was closed, reopened and closed again, the opening date of the exhibition was postponed over and over again, and then Frank Horvat was already too ill — there could be no question of holding the exhibition at such a time…

The ‘Bestiary’ project presented by MAMM as part of the festival of ‘Fashion and Style in Photography 2021’ is a generous gift to our museum from the Frank Horvat Studio. This exhibition means a lot to us. First of all it gives an opportunity to express respect and appreciation for the legendary photographer, as well as to introduce the viewer to a new aspect in the incredibly diverse work of Frank Horvat.

Frank Horvat is a classic and a rebel, a revolutionary, a nonconformist and cosmopolitan. Above all he was known as a photographer who managed to combine fashion and street photography. Horvat brought models from the photo studio to the streets, renouncing complex theatrical makeup and clumsy, bulky cameras in favour of a convenient lightweight Leica, which heralded a true revolution in fashion photography and greatly influenced development of the genre in the 20th century.

Horvat was never bound by stereotypes or afraid to exceed the limits — he was interested in life in all its manifestations. At the beginning of his career he took photographs inspired by the traditions of Italian neo-realism and reportages from luminaries of the Magnum photo agency, and once involved in fashion photography he never forgot to use techniques and skills acquired over the years in photojournalism for his shoots.

It was Frank Horvat who in the 1970s pioneered the widespread use of digital technology in his work, enthusiastically demonstrating to both colleagues and the public the opportunities this provided for the professional photographer.

The ‘Bestiary’ exhibition is the result of Horvat’s ‘romance’ with digital technology, as he wrote in his essay for the exhibition. Frank Horvat was an excellent writer, and we are happy to quote the text in full.

‘Like most people, I have recurring dreams from time to time, both good and bad.

In bad dreams I miss a plane, lose my teeth or walk through narrow openings — that is, I experience the most common fears that are most likely familiar to any psychoanalyst. Good dreams happen less often, but they are more original. There I meet animals that talk to me, and this brings me moments of happiness, the feeling of which persists for a long time after I wake up.

I think that these dreams were the first impetus for creation of this series. The second reason was my ‘romance’ with digital technology.

Some of my photographer friends don’t share this passion. “Computer manipulation,” they say, “marks the end of authenticity, and therefore the end of all photography.”

Perhaps. No one disputes that a spontaneous camera will “objectively” capture what is directly in front of it. For example, in the centre of Paris it will photograph the Cathedral of Notre-Dame, and at the same time buses, billboards, souvenir vendors, car traffic and tourists. However, the formal fact of the presence of Gothic architecture in the frame may seem insufficient to a photographer concerned about perspective, who is looking for his “decisive moment”. He will seek a way to hide the modern surroundings and take, for example, a photo in the moonlight, or with a wide-angle lens, or with extended shutter speed, so that all moving objects disappear. In his understanding these are not manipulations at all, but artistic means aimed at embodying the “special reality” of Notre-Dame, which differs from everyday Paris and therefore may deserve even more of our attention.

Similarly, but with greater effect, retouching and image processing on a computer allow me to both highlight and remove different elements of reality. Anyone can find the animals represented in the “Bestiary” in the zoos of Europe and America, but freed from the concrete, the cages and human eyes, they appear to me as they exist in nature and, perhaps, as they come to me in my dreams.’

Frank Horvat was born in Italy, in the area that is now Croatia. He got interested in photography while still at high school, trading his stamp collection for his first simple camera. According to the photographer, a friend persuaded him that the camera would bring success with girls.

After the Second World War Horvat studied fine art at the Accademia di Brera in Milan, then worked as a designer for a Milan advertising firm. In the early 1950s Horvat travelled extensively in France, India and the UK, taking photographs inspired by the traditions of Italian neo-realism and by the reportages of luminaries at the Magnum photo agency. In 1955 Edward Steichen included one of his images from this period in the famous ‘Family of Man’ exhibition at the Museum of Modern Art in New York. This was the turning point in Horvat’s career.

In 1956 Horvat settled in Paris. After getting a job at the legendary Magnum photo agency, Horvat worked there for just three years before turning to fashion photography. Frank Horvat’s innovative style proved a great success. He collaborated with leading fashion periodicals including ‘Jardin Des Modes’, ‘ELLE’ and ‘Harper’s Bazaar’. In the early 1960s Horvat became one of the most influential and highly paid young photographers in fashion photography, working alongside such celebrities as William Klein, Helmut Newton, Jeanloup Sieff, Terence Donovan and Bob Richardson.

Despite undisputed recognition, Frank Horvat was never restricted to a single genre. He resumed his cooperation with Magnum, created a whole gallery of portraits depicting Federico Fellini, Marcello Mastroianni, Alberto Moravia, Agnès Varda and other movie stars, issued a book with digital photo collages illustrating classic fairy tales, travelled widely and participated in exhibitions around the world, dreaming and making new plans for the future until the end of his days.