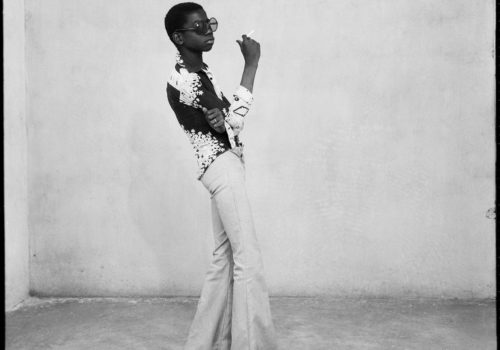 Malick Sidibé was born in a Peul family in a small village of Mali. He was noticed for his talent as a draftsman and was admitted to the School of Sudanese Craftsmen in Bamako from which he graduated in 1955. He decorated the “Photo Service” store of Gerard Guillat, also known as “Gégé la Pellicule”, who offered him a job as his apprentice. Two years later, he opened the “Studio Malick” in the centre of Bamako in Bagadadji. The wildness of the 1950’s and the upcoming of Independence gave birth to a new generation of photographers who were totally involved in the cultural and social life that they recorded. Malick Sidibé, a pivotal character in this scene, was highly appreciated by young people and was invited to all the parties they organized in clubs, where they learned the new dances coming from Europe and Cuba, and dressed elegantly in Western clothes. In 1957 he was the only reporter in Bamako who covered all the events, festivities and surprise-parties. On Saturdays, these parties lasted until dawn and continued on Sunday on the banks of the Niger river. This on-the-spot coverage provided simple pictures, full of truth and complicity. Spontaneity emerges from his photos: he captured the playful partying, full of laughter and life.

Died in 1997, Kinshasa, Democratic Republic of Congo, where he lived and worked

Depara came to photography almost by accident. To record his wedding in 1950 he bought himself a small Adox camera—after which he never ceased to seek out new subjects for his lens. Settling in Kinshasa in 1951, Depara first combined his photography with various small jobs: repairing bicycles and cameras, dealing in scrap metal. In 1954 the celebrated Zairian singer Franco invited him to become his official photographer, launching Depara’s career as a chronicler of Kinshasa social life in the era when the Rumba and the Cha Cha defined the city’s rhythm. He set up a studio under the name Jean Whisky Depara and spent his days in bars like the Kwist, the OK Bar, or the Sarma Congo. At night he hung out in clubs such as the Afro Mogenbo, the Champs-Elysées, the Djambo Djambu, the Oui, the Fifi, the Show Boat. Night owls particularly fascinated him and with his flash Depara captured an Africa stripped of conventional social codes. Interracial couples, hipsters, and those who in imitation of James Dean chose to “Live fast, die young” became both his subjects and his clients. Depara died leaving his archive of hundreds negatives untitled; with the permission of the artist’s family, his close friend Oscar Mbemba has captioned the works in the spirit of this era.