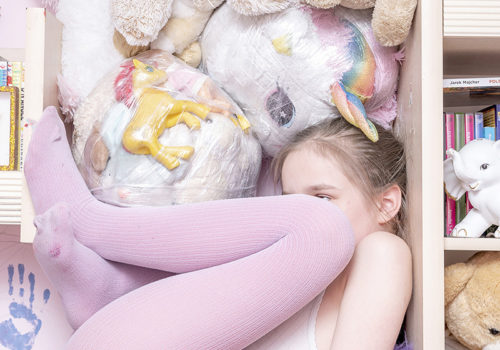 Presented at the portfolios reviews of the Łódź photo festival in Poland, this work by a young photographer from the country delicately highlights the power of children’s universes, shields against all injuries.

How childhood ceaselessly invents avenues to escape the darkness of the world and transforms through the power of the imagination tangible and beautiful outlets… The pink walls of the bedroom of photographer Michalina Kacperak’s little sister bear witness to the fact that always remains color even in the darkest moments. With her, it is alcoholism that has reached the father figure and, in this context, makes children’s lives difficult to live. By taking a distance from her family, the artist saw how much her little sister was now exposed to what she herself had experienced earlier and thought of highlighting the latter’s overflowing imagination as a wall against the saddest aspects of existence.

Between the four walls of her room thus appear in the form of metaphors personified by drawings, words, images and children’s toys, what the harshness of reality provokes in a twelve-year-old girl. For nearly six months, the photographer captured her sister’s world and tried, with her, to invent scenes that conveyed both the sweetness of intimate emotions and the harshness of the family climate. “I wanted to work with the memory of my childhood, but also with the childhood that my sister is going through. I told her about the project of course, and while I’m not sure she understands all of the context around it, I know she understands what’s going on with us. If she didn’t feel comfortable with my idea, I would stop right away. “, says the artist who added: ” I believe that it is a form of therapy for her and me “. The project is not finished by the way and she is currently thinking about her new future forms.

For the first exhibition of this work in Poland a few months ago, Michelina Kacperak invited her sister to come and draw in colored pencil around a photograph hanging on a white picture rail. Thus, she began to extend certain drawings in the image, to add here and there a figure from her childhood world. “For me, it was very important that she draws outside her bedroom, that she can assert her imagination in front of the rest of the world,” said the photographer with a lot of emotion in her voice.