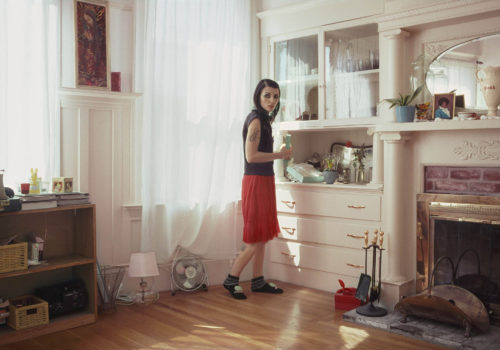 Publisher Jack Woody (Twin Palms) confided about Sarfati’s work, “When I look at the women in her photographs I suspect in some way they are all self-portraits. Lise sees in these women an incredible endurance, confronting their circumstances across the surfaces of the indifferent western landscape they have come to occupy.”

I interviewed Lise as she was just leaving to hang her exhibition in London.

What were your earliest photographs and influences?

When I was 13 years old, my mother would take me with her when she visited elderly women in their big, old apartments in Nice. The sight of these women made me anxious so I turned these visits into a game. I borrowed a 6×6 camera from my sister and would take a portrait of the old women and their apartment while my mother talked with them. I already had a serial, conceptual approach. Photography allowed me to create a fixed image that removed me from reality and allowed me to have a different relationship with the world. When the women died, my mother would go back to their apartments and I would photograph the empty rooms.

My second subject was the Promenade des Anglais in Nice, a much more linear approach while following the promenade.

My father made Super 8 Kodachrome films, which I loved. I remember being very sensitive to the emotion provoked by the colors, the sequences. My mother was a professor of literature. Her main job was writing and literary criticism. At 15, my mother gave me the Diane Arbus monograph published by Editions du Chêne.

We lived on top of Roman ruins. The vegetation in the garden where we lived, the light in Nice which is very harsh, the combined vision of baroque beauty and the decomposition of individuals, I wonder if the chemistry between the setting, the old people, adolescents and the Italian border wasn’t some kind of explosion.

Photography did not really exist at the time; we did not get a daily stream of photographs. We would only find books in black and white published by Robert Delpire or Les Editions du Chêne, like Stieglitz, Robert Frank, Cartier-Bresson. Photography appeared as an exception, a mystery.

Your work has a cinematic quality to it sometimes. Where did you study and how did your Fine Art career begin?

I completed a Masters in Russian at the Sorbonne, in Paris. I learned to photograph by myself, reading books and through my professional practice at the Académie des Beaux-Arts. I studied film on my own, if you can call it studying, by going to see movies like those by Dziga Vertov, Jean Eustache, Robert Bresson, Pier Paolo Pasolini, Alain Resnais. I spent a year in Aix en Provence and worked in a gallery that only exhibited photography. Then I was hired by the Académie des Beaux-Arts in Paris (Institute de France) and I did all the photographs for their exhibit catalogues. I reproduced master paintings by Monet, Dali and others.

I spoke Russian. I wanted to experience the country’s disruption up close and I moved there in the 1990’s. I was fascinated by Russia and the revolutionary periods, particularly the 1920s, the avant-garde and their history.

My first show was at the CNP in Paris and the Musée Nicéphore Niepce in Châlon sur Saône, (France).

I received the Villa Medicis and Niepce awards for my work on Russia. The Niepce Prize came with an exhibit at the Centre National de la Photographie (CNP) in Paris, the equivalent of the Jeu de Paume today. But the real catalyst was The New Life in 2003.

I moved to the United States to create The New Life in 2003. I relished the feeling of being a foreigner. My first galleries were Yossi Milo Gallery (New York) and Rose Gallery (Los Angeles) where I showed The New Life.

What was your intention behind your series, SHE?

The ordinary and the singular. Universality. Anti-heroines. Projections and situations.

In my last series in Russia, there were a lot of adolescent characters and I was already working on landscape. I learned the relationship with landscape in Russia , where it is very strong since man is dominated by nature. Man is insignificant. My series The New Life and She reinforced this approach. The adolescent in The New Life or the sisters in She are subterranean beings, moles through which narration exists like in a novel.

The women in She have a vaporous relationship with their surrounding, their house, their streets, and their landscapes. They are shut in their neurotic attitude from where it is difficult to perceive the outside world.

My intention was to show a bit of the futility of our daily life, the simplicity of situations and our movements in our environment and to oppose this simplicity to another field: that of interiority, emotion, psychological relationships. It is to receive the emotion (of the 4 women) and to mix them with mine. I also had autobiographical elements that allowed me to situate myself emotionally: I have 3 sisters.

My point of view was not generic but I wanted to be immersed in a particular story between four women from the same family. This story had to have a generational dimension.

While The New Life recounts the feelings of adolescence and the attraction to the void, She evokes a sense of identity, a mirror. In The New Life the characters spoke to each other as one. They projected a profound melancholia. In She Christine and Gina are older, about 40 years of age, while Sloane and Sasha are younger, around 20. They are all sisters.

Gina cultivates a masculine/feminine sexual ambiguity and wears a black wig to look like her sister Christine. Sloane, Christine’s daughter, changes her appearance constantly going from a blond wig to discolored hair. She has been a nanny for two years. Sasha, Sloane’s sister, is perpetually depressed, enclosed in her cocoon and inclined to melancholia.

I was not interested in these biographical details when I decided to do the series. I was interested in merging two approaches: that of the ordinary and the singular.

The classic image of the mother is that of a woman drowned by the love for her little one. In She however, the mother, the daughter, the sister and the other sister can be rivals or enemies, competitors or indifferent.

We are in a small provincial town in the USA, downtown Oakland, where there are beautiful Victorian Mansions in the ghetto, with magnificent chimneys and dining rooms.
These sisters did not make it easy which made them alive and attractive.

The photographs and artifacts in the rooms are especially interesting.

The environment is an important element. Christine is photographed in Oakland in the ghetto in a house she shares with a roommate. We meet Sloane in the ghetto in Oakland in the house of a friend of her mother’s. All these houses look alike with their wooden windows and their chimneys. They are the interiors of Hopper paintings. We see Gina coming out of a grocery store, these are environments linked to the 1970s. The only images of projection that are out of the ordinary are those of Christine in the desert.

How do you perceive your use of color in your work?

I have an inner sense of color. I do not even think about it. I do believe color gives a special meaning to my work. The color gives balance or imbalance to an image or sets a mood if the image is monochrome.

I worked with film stock that no longer exists (Kodachrome 64), the first color film used for Hollywood movies in the 1940s. All the photographs were shot in natural light without any outside source.

How did you meet Twin Palms publisher Jack Woody?

I met Jack through David Stretell who showed him my series The New Life that Twin Palms published in 2005. Jack is a complex and mysterious character. I very much admire his work and his publications. Also, everything he initiated; Roni Horn, Philip-Lorca diCorcia, Eggleston, Mapplethorpe, Jean Luc Mylayne…now Ryan McGinley and Antonio Lopez. He built his collection by mixing known and unknown artists with complete freedom and according to his beliefs. It is a work of art in itself, like a private collection. Jack links the books he publishes to his life and his aspirations. And knowing his books, we wander from a feeling of total freedom to a permanent sentiment of immaturity, melancholia, asserted sexuality mingled with an obsession with death.

What has been your experience working on books?

I made The New Life with Twin Palms and the book was released very quickly. I was lucky. Everything flowed. I think we completed the whole project in 4 months. I think with She it is a bit longer but it should be ready in May 2012. One doesn’t realize it, but a book is like a war machine.

Tell me about your upcoming Retrospective at the Bibliothèque Nationale in Paris in 2014.

The curator is Anne Biroleau. The exhibition will be centered on my recent work in the USA. It will be a very important show with several series. It is hard to say how it came about. I always showed my work to Anne Biroleau who accepted to enter my universe and open up to my work. I also very much admire her work as a curator.

She Photographs by Lise Sarfati
Rose Gallery, Los Angeles
March 31 through May 2012