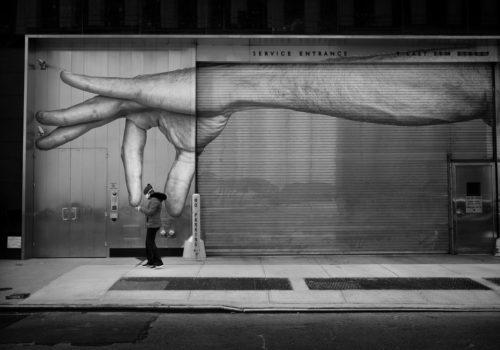 “No one should come to New York to live unless he is willing to be lucky,” wrote the great New Yorker writer and storyteller E.B. White in his incomparable short book on the city, This Is New York. Phil Penman—like me, an expat Brit who has made Manhattan his home—has certainly met that challenge. But in his images of New York, it can seem more as though his lens is the lucky one: There’s so often a What on earth…? How did that happen? Who put that there? quality of surprise in the picture.

The real question, of course, is How did he see that? Penman makes his own luck. I wish I knew the full mystery of it, but I imagine that it owes something to the stealth, patience, and opportunism he acquired in the journeyman work of his earlier career as a photographer for newspapers and magazines. To some, that’s just a job, not art, but what makes the street photographer an artist but stealth, patience, and opportunism?

I often think of Penman in the same bracket as the late Bill Cunningham because we all three have in common bicycle riding—a handy tool for street photographer. Cunninghambegan by taking portraits of society balls but became renowned and revered for his extraordinary, roving eye for what New Yorkers were wearing.

Cunningham’s street-fashion ethnography was whimsical and wry. Penman’s sensibility is darker and more ironic. He, too, finds a face in the crowd but it’s more likely to be the strange or sad one than the giddy or hip. He is more attuned to what White called the “great feeling of forlornness or forsakenness” that New York can impart.

Above all, though, the city itself is Penman’s subject, his sitter, his muse. He finds his frame in New York’s singular mix of panoramic horizontals and vertiginous verticals. He is ever-alert also to the city’s serendipitous visual jokes, its unintended trompe l’oeils, and he has a baleful eye for the “found text” of advertising hoardings, street signage, and graffiti slogans and turning them into a sardonic version of a Barbara Krugercaption.

Amid the bustle and hustle of life in New York—the sheer, dogged purposefulness of what the poet e.e. cummings called “a people-shaped toomany-ness,” “this busy monster”—Penman’s photography finds a still center that most of us rarely pause to notice or feel. Sometimes he shows us the city’s melancholy, because that is one of New York’s moods, but he also always lets us see its shabby majesty.