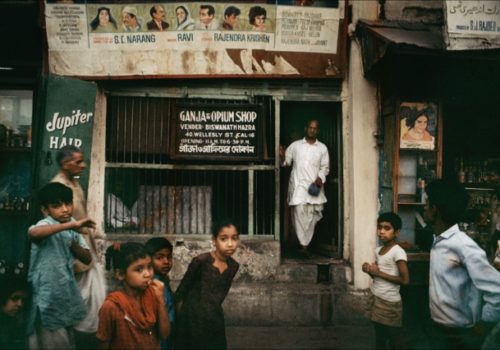 In 1963, Jean-Louis Bloch-Lainé was hired as a photographer by Elle magazine. Peter Knapp is then the art director and will leave a strong imprint during this rich period of the 1960s – Elle magazine, energized by the personality of Hélène Lazareff, not only accompanies the fashion movement, it is also a marker of the society of the time -: Knapp signs pages full of visual inventions, rhythm and colors, which he often illustrates himself as a photographer. Jean-Louis Bloch-Lainé is not sure that he will make fashion photography his profession, nor is Peter Knapp convinced and points it out to him. In 1966, however, he asked him to assist the English photographer Norman Parkinson, then very famous and regular contributor to the magazine, for a series of fashion shots for the Christmas issue. These will be made in India and Bloch-Lainé, then 26 years old, can only be enthusiastic about discovering such a country. He does not yet know that this proposal will allow him to carry out a first personal work which will be published a few years later, in 1969, in an issue of the very young magazine Photo.

As Norman Parkinson prepares to leave India, his assistant decides to postpone his return and spend several months exploring the country. He was in fact dazzled by the spectacle of towns and countryside. But also by the particular light of the first hours of the day as well as that of the twilight which envelops this spectacle. From this observation of light, from the need to compose with it, he will learn lessons for the future, in his studio where he will find his way through a very refined practice of still life. For now, Bloch-Lainé is all about his Indian adventure; he passes through different regions, from Nepal to Kashmir, stopping in several cities such as Calcutta and Madras.  Man and woman, alone or in a group, most often occupies the scenes he sets out to capture, with as much respect as admiration. And he knows immediately when his presence disturbs the subjects he is aiming his lens at. His curiosity, he wants to clarify, is essentially photographic; it was not driven by religious or philosophical convictions, as were many Europeans who visited India at that time. Overwhelmed by this wonderful adventure, he returned to France, but “without knowing if what [he had] seen was indeed on the film […], with just the hope that his photos were more or less well framed and well lit ”- Bloch-Lainé has always shown great humility in his words. “It’s one of my favorite sensations in photography,” what he calls “the latent image”. Unlike the tools of today which allow you to immediately see what you have photographed, the film camera of the 1960s, as sophisticated as it is, only fixes an image. It is up to the photographer to mentally reconstruct it, to dream it, until the moment his film comes out the laboratory.