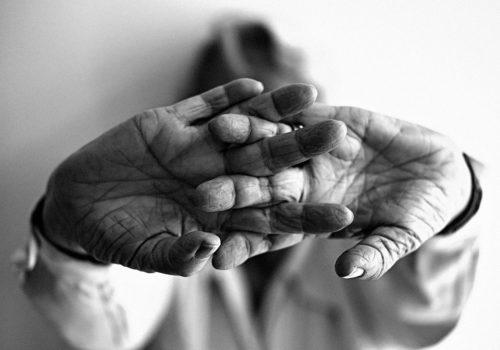 Since 2017, during his consultations, Fred de Casablanca, a passionate general practitioner, asks some of his patients – with whom the trust is strong enough – if he can photograph their hands. Because they reveal the first contact with them when he welcomes them and invites them to enter his office, because he can already feel there anxiety or certain tensions, suffering, but also serenity or exaltation, which will or will not be confirmed in the way they place their hands when seated facing him, or when he takes their pulse. The life line on the palm, the visible veins, the seized joints, the pigmentation, the temperature… The description of the hands is endless.

Fred de Casablanca takes close-up black and white photography, revealing the marks left by time and life on the body and skin of his patients. The images are illuminated by short stories collected during the consultation which are as many testimonies of life and precious words on care today. The general practitioner is the first medicine. The quality of the doctor-patient relationship depends on its good dosage, transposed in this book with rare empathy.

Excerpt from the text by Christian Caujolle
“The realization of the series of Fred de Casablanca, intimate and deep but which never transforms us into voyeurs, is only possible in the exchange, by the exchange. A collaborative practice that in no way reduces the function and responsibility of the photographer, but which best manages the questions that may surround the legitimacy of a photographic portrait. Because, even if we do not see the faces, if those photographed are not recognizable, it is indeed a portrait. No face to face resulting in a portrait, but a way of looking together in the same direction. […]

To respect the impossibility of showing the face of his patients, Fred de Casablanca has developed a clever device that is not formalistic because it does not indulge in the repetition of images or structure. Result of an intense exchange based on years of companionship and despite a brief shooting time, this set becomes a singular form of affective and affectionate family album. On deeply human bases.”
Christian Caujolle

Excerpt from the text of Fred de Casablanca
“There are people who do everything right. They go to bed early, don’t smoke, don’t drink, eat organic, vegan, do yoga or meditation. This is not enough to break longevity records. You can have exemplary conduct and die of devastating cancer in six months. Fernande, 75, does just the opposite. She drinks at noon, smokes her first cigarette at six in the morning   the first of another thirty a day. She tells me it’s too late to stop anything. I think if she stops drinking, there’s a good chance she’ll end up with delirium tremens. The rest of her time, she does crossword puzzles and watches television. Her children have long forgotten her and her husband, who never smoked, died of lung cancer five years ago. She supports the Yellow Vests by wearing a faux leopard coat. At each consultation, I just renew her medication. The other day, while driving her home, I confessed to her that I had dreamed of her. In this dream she told me that she had quit smoking.”

“Some couples consult together in all circumstances. This poses problems to really enter into confidence and intimacy, and yet with Anne and Carlos we talk about the diarrhea of ​​one or the palpitations of the other without any difficulty. I can examine Anne under Carlos’ gaze and vice versa. This situation has been going on for 25 years and it is like a waltz in triple time. I don’t imagine a face-to-face consultation because that will mean that one of them will have disappeared…”
Fred de Casablanca