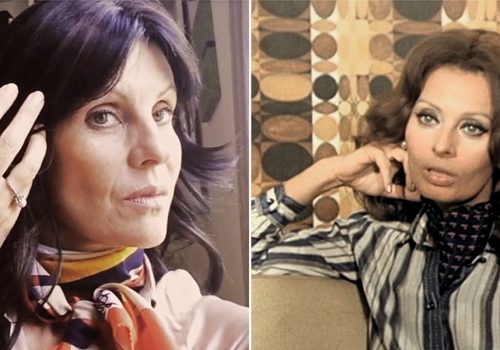 Change your appearance, era, genre, look in the mirror, before performing in front of your friends, the family circle, reproducing everyone’s tics, the stars of the screen. Children love to dress up, digging into cupboards and attics suits, hats and other accessories.

Growing up, some have kept this part of the game, this taste for disguise, grimage, sometimes they even make a profession of it. Thus Laurence Bibot that we will have known in Miss Bricola with Les Snuls, then in her shows such as Bravo Martine where she delivered clichés, with the intonation, the tone of voice unmasking stereotypes, feminine this time.

This gallery of portraits will continue in other shows, Miss B or Sisters Emmanuelle, between derision and homage, which show a devastating humor and a faculty of acute observation, before Travestis, a documentary which she realized on the universe of transformists.

These are no longer imitations but playbacks, Laurence Bibot reproducing the movement of the lips of the interviewees whose costume and elements of the decor she adopted.

Up to now delivered to social networks, these capsules will be presented for the first time at the Musée de la Photographie, which hosted from May to September 2017 the exhibition “En léger différé” devoted to Belgian television, organized by Sonuma partner this time again , Studio Madame by constituting a humorous extension, a way of recycling the television image.

Wigs, scarves, anachronistic glasses, on floral blouses or Chanel suits, will be there for these parodies where it will sometimes be difficult to recognize the actress.

“If the cinema has become emancipated by adding sound to the image, Laurence Bibot has fun doing the opposite. In her series of videos, which infinitely multiplies her image while distorting it, she embodies voices and realizes one of her fantasies – being the woman with a thousand faces. With the exception of the few public figures she has represented in her gallery (Gina Lollobrigida, Marguerite Duras, Amélie Nothomb …), we do not know what those whom she borrowed her speech from look like. The effect is surprising and touching, to the point of considering the exercise as a tribute to the anonymous who, unwillingly, participate in this huge showcase of characters. By adding an imaginary face to a very real sound, Laurence Bibot proceeds by augmented reality and deploys an unsuspected landscape where it is believed that there is only one voice. ”

Extract from the book accompanying the exhibition.

“In media jargon, she is called” Madame Michu “. In other words, Ms Jones, the voice of the street. This is the embodiment of statistics: rather than making the numbers speak, we give the floor to “the little lady”, to the passer-by. {…}

Television has used Madame Michu “Ms Jones” since its invention. {…}

Laurence Bibot slips into her vintage dresses, composing a mosaic that depicts how women then (and now ?) Were represented on the small screen.

Next to these Amélie Nothomb, Barbara or Juliette Greco (…) who look at the camera with confidence, there are also and above all these anonymous archetypals who exhale the flavor of a time when the staging of oneself and the expression of one’s opinion was not self-evident. Also from a time when, on television, {…} it was the man who was the eye-catcher and transmitted  ordinary sexism to the public. {…}

This landscape could be depressing if Laurence Bibot did not highlight here the expression of these women in what they have which is most spontaneous, touching, funny … in other words, what they have that is really most Belgian. {…} Here an accent, there a garment, a hairstyle, an attitude {…} In this country which does nothing like the others, these women, filmed to the height of “average Belgian”, metabolize and catalyze the taste of an era, a territory. And we can only love them. ”

Extract from the book accompanying the exhibition.