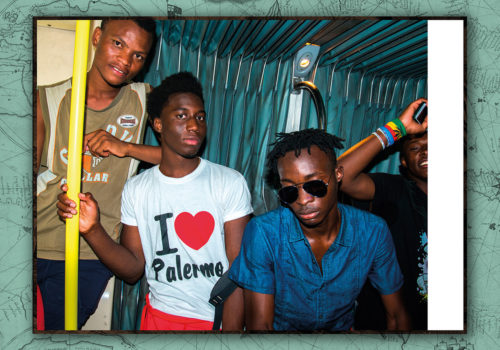 The book “Binidittu” examines/addresses the condition of contemporary African migrants in the Meditteranean through the little known figure of Saint Benedict the Moor – son of enslaved Africans, who became the first Modern black saint in history (Sicily 1524-1589). Binidittu questions the amnesia of Europe and Italy with respect to the historical presence of Afropeans, of which Saint Benedict the Moor is one of the most highly representative figures, although unknown. Furthermore, it establishes a parallelism between the (in)visibility of the man Benedict, progressively erased by Western imaginary, and that of African diaspora in the Mediterranean.

The book has two focuses: the first part focuses on the legacy of Saint Benedict the Moor, the worship taken by Sicilians devotees, their multiple representations and discourses. The second part focuses on the complex experience of African diaspora living in Sicily. With some exceptions, in which the figure of Benedetto is occasionally reclaimed as a symbol of the anti-racist struggle, these two worlds rarely intersect. But the union point seems to be Dieudonné Benedetto (the last portrait of the book), a young Ivorian, who, after arriving in Sicily on a boat, he discovered the figure of Saint Benedict the Moor and decided to become Franciscan with the name of Benedict. As in sixteen-century Sicily for a man like Benedict the Moor, becoming a Franciscan meant to escape the condition of marginal and invisible (son of slaves and peasant), in a similar way, today for Dieudonné being a Franciscan also means to escape the precarity of the migrant condition. The habit made the man, the habit made him again « visible ».

Included in the book and along with Nicola Lo Calzo text, there are essays by Igiaba SCEGO, Doudou DIÈNE and Alagie JINCANG, addressing the multiple significance of Benedict today in the context of Mediterranean migration and contemporary forms of (in)visibillity of the African diaspora. Passages from writer Ralph ELLISON’s book The Invisible Man, a seminal work of African-American literature, feature throughout Binidittu along with interviews and archives.

The book, designed by Ramon Pez, was published by L’Artiere with the support of Fond de Dotation Buchet-Ponsoye, Prix Elysée and Cnap.

Published in English and Italian First