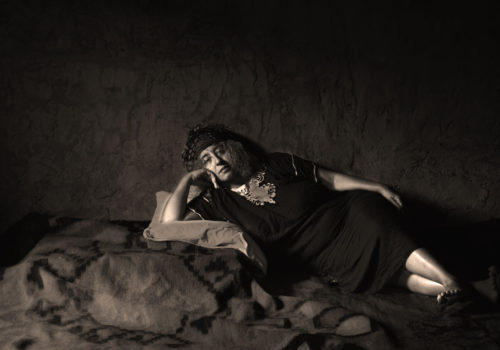 In Sufism the Wird is the practice by which one mystical path is differentiated from another. The Wird makes it possible to transmit the secret which will attach the master to his pupil. The wird is a set of incantations, prayers, and breaths that leads to the “hal”, to the absolute. The Hal is the extinction of the self in the other.

The Sufi experience goes beyond the divisions that society sets up, identity issues cancel each other out. Where the practice of Sufism is permitted, society is rarely attentive to fundamentalisms. This research is also what constitutes us. It is the part that connects us both to the universe and to our nucleic part.

What separates men is canceled when they find themselves experiencing a state of grace and breath, whether in Montreuil, in southern Algeria or anywhere else in the world. It is no longer a question of the individual but of presence.

The landscape, nature are integral parts of this beauty. They are places of fixation and revelation. If in the past, I went far to photograph these Sufis, my meeting with brotherhoods of the Sahel in Montreuil or in the suburb of Paris transformed my approach to the subject. It is in these ordinary, intimate and closed, almost underground places that I found my photographic writing. It was in Montreuil that the pattern of representation began to take shape. In these impersonal and insignificant places, I understood that it is not necessary to go far to encounter what is near. For 20 years, I continued to frequent them and photographed their presence.

The origin of the project is the meeting with a family who had housed me during a car breakdown on the Hauts-Plateaux in Algeria. A decisive meeting. During our conversations, I was struck by their availability, and the benevolent warmth that emanated from them. They were neither inquisitive about my religious practice, nor outraged to learn of my atheism. At the end of the stay, they told me that they are Sufis.

The following is a succession of meetings, in France, or during my travels.

If at the beginning I had a documentary approach to the subject, I quickly realized the limits of this approach. Reflecting on its representation took me a long time. Sufism to sum it up is the representation of the ego in a vertical, upward position, and the culmination, the extinction of this ego in the other. The other in this case is “God”

We are in metaphysics. To put man in this ether which envelops us.

A period of doubt followed, and I decided to take a “break” from work to devote myself to something else.

I changed the format of my hardware. I kept using Analog films. The 24X36 was replaced by  6X7, the 6X6, and for some time by the 4X5 inch. The format is an integral part of the maturation process. Photography first becomes a mental construction. The camera is only the tool that allows me to achieve what I perceive as an end. To walk slowly as one would walk in the spirit. The speed of execution (bubbling) of the first times, is replaced by the resonances that the scenes experienced or felt given birth to in me. Decanting these scenes as one would a wine, to keep only the nectar. It was at this precise moment that I finally encountered the grammar and vocabulary that accompanied this work. To give birth to my language, not what would be the best, but the appropriate one.

The NB accompanied me at times. The color had imposed itself for its meaning for certain scenes. Knowing how to read a color, provoke certain dominants, to resonate with my feelings. In Sufism, we talk about energy, aura, composant colors. They are what is inaudible and yet noisy, what materializes the invisible. The dominants represent this paroxysm.

The reaction of the people photographed is benevolent. Shots of Dhikrs, like khalwas, are not allowed. It took years of meetings to earn their trust. Trust is given at a moment, it does not enter into any logic or priority. A khalwa for those I know takes place in closed, dark places. A barely perceptible opening lets a thin ray of light pass through, marking time. A pendulum between this time and this space. In the back of the room, in total silence, stands the attendant for the retreat. Through this silence represented by the khalwa, the image must become one with this darkness and make it an ally.

Information about the book
http://lallahadriaeditions.com/portfolio/wird/