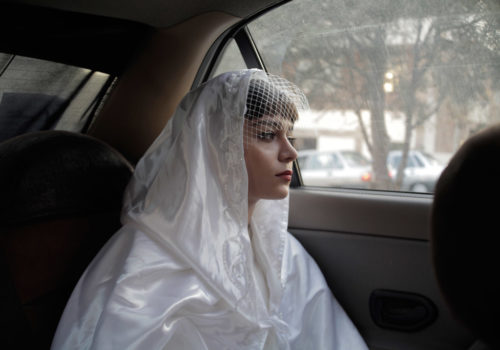 The Fondation Louis Vuitton hosts the first exhibition devoted to Chinese art in France in ten years. Co-organized with the Ullens Center for Contemporary Art (UCCA) of Beijing, the exhibition showcases twelve artists in their thirties. The works of some of them are part of the Collection and are on display in other galleries. These artists represent a protean generation, caught in the turmoil of socio-economic transformations and oscillating between modernity and tradition in a plurality of multimedia-based approaches. The exhibition offers a glimpse into the constant exchanges which take place against the backdrop of globalization and technological innovation.

Cao Fei draws inspiration from theater and opera as much as from television and manga, and transgresses the conventional boundaries between the real and the virtual, between the private and the public. His installation Strangers, directly inspired by a dating website which allows users to communicate with each other, denounces the false, illusory character of such exchanges. It also puts into action the artist’s Second Life avatar in fast-paced videos where traditional symbols collide with the wayward consumerism of his contemporaries.

In addition to his artistic research, Xu Zhen is a founder of MadeIn Company (a pun on Made in China), an enterprise dedicated to the production and organization of exhibitions. Playing on globalized syncretism, Xu Zhen explores the codes of the art market and the unity of the work of art. His video Physique of Consciousness goes back to the prayer rituals of different religions and martial art codes in order to subvert them in a parody of the contemporary cult of “new age” and “wellbeing.”

The same sense of subversion can be found in the work of Liu Shiyuan, who uses incantations engaging the notion of happiness which she broadcasts non-stop over the radio within a space entirely covered with carpeting, combining the feeling of being in a bubble with a sense of unease at the blend of cultures! Liu Shiyuan draws mainly on the Internet, TV, and everyday objects in order to distill a caustic humor.

Tao Hui’s visual tales, which draw on China’s collective memory, offer the viewer a sensory experience bordering on the fantastic, which raises the question of the future of traditional ethnic communities.

Yang Fudong’s multi-screen installation, Blue Kylin—A Journal of Shandong, documents everyday life of quarry workers, and the environmental impact of ore extraction. This is a subtle black-and-white work of whistleblowing under the guise of  collective portrait.

Liu Chuang creates video performances in public spaces, exploring the disillusionment with the gap between individual aspirations and present-day China. His promotional video “BBR1” (No. 1 of Blossom Bud Restrainer), based on a product designed at a Beijing laboratory to restrain springtime flowering of poplar trees, blurs the boundaries between official state propaganda and advertisement.

Similar contradictions can be found in the work of Hu Xiangqian who opens and closes the tour of the exhibition with his beautiful video, The Women in Front of the Camera, which shows a woman dancing alone amid the indifference in a Beijing park. It is an ode to freedom and individual destiny against the prevailing doubt and uncertainty.

The individual/the collective, the local/the global, the East/the West—these are some of the issues addressed by the featured artists, as well as their elders (including Ai Weiwei), in this geographical region which is as complex and dynamic as it is fascinating.