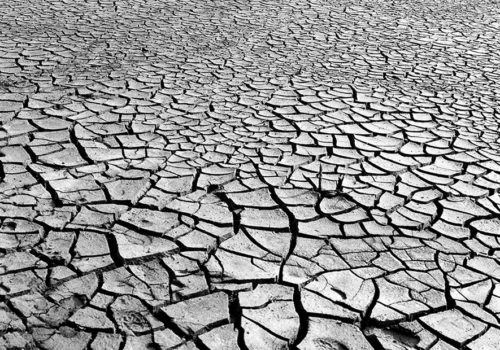 Jacqueline Salmon has a retrospective exhibition at the Bibliothèque de Lyon Part-Dieu until May 15, 2021.

« Far from the political sounding series that have been shown a lot at the Michèle Chomette gallery, I preferred to choose for L’œil de la photographie, photographs which, although taken in the real world, escape from it, and carry to the fore. ‘imaginary.

La vallée de la Maulde ou l’envers de l’eau. 1995 The artificial lake of Vassivière was emptied, revealing the landscape it had swallowed up. The gaze is lost in the memory and the distances of the reborn painting: a river winds, a small bridge tells the story of men in the landscape, hills modulate the space, soften it. We are faced with a repertoire, a vocabulary of which we do not master the meaning, faced with the evidence of the suitability of the place to represent a mental world.

Le temps qu’il fait / le temps qu’il est. 2009-2010 There was a Météo-France branch in Evreux, and a city program for the integration of undocumented immigrants. I decided to do their portraits and look at them like princes. It was only after looking at the prints, that I was moved to see that they were similar to the models Piero della Francesca had painted in the Renaissance.

Cartes des vents. 2009 – 2016 In the same way that immigrants traced paths scratching the planet, winds and clouds hung over the city in an incessant flow that meteorologists noted hour by hour. It was with them that I learned to read and draw wind maps.

Miroirs de Venise. 2009 I had the desire to photograph the surface of 18th century mirrors whose mercury silvering had slowly degraded with time and humidity. I had imagined them then in my photographs, like large surfaces with changing gray and only partially reverberating the light.

When I wanted to realize this project which had taken the form of a dream, while I was looking for a representation of time, I knew that I could not escape the reflection of the places. I suddenly saw in these mirrors and their reflection a way of representing the city of Venice in all the depth of its history, frozen in a dream that transcends and eternalizes it. »

Retrospective exhibition at the Library of Lyon Part-Dieu until May 15, 2021

Released at the end of May, currently under subscription from Loco editions http://editionsloco.com/Futurs-anterieurs