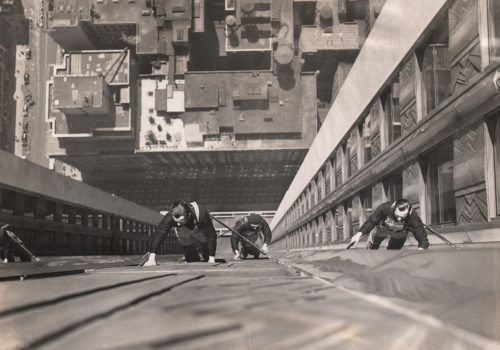 Keith de Lellis Gallery celebrates the 90th anniversary of New York City’s magnificent Art Deco skyscraper in its summer exhibition. After demolishing the famous original Waldorf Astoria Hotel on Fifth Avenue in 1929, the Bethlehem Engineering Corporation took on the world’s most ambitious building project to date: the construction of the Empire State Building, the first 100+ story building. The Chrysler Building, with 77 stories, briefly held the title of the world’s tallest building before being unseated by the Empire State a mere 11 months later. Dwarfing all surrounding buildings, the Empire State stands at 1,454 feet tall. Construction began on March 17th, 1930 and was completed in record time, opening on May 1, 1931. As a tourist attraction, the site found immediate success, collecting a ten-cent fee for a bird’s eye view of New York City from telescopes atop the observatory.

The record-breaking height was said to serve a special purpose: for its tower to act as a mooring mast for dirigibles, positioning the building and its developers at the cutting edge of air travel in its infancy. In reality, the ambitious docking station plan was not at all practical: “the notion that passengers would be able to descend an airport-style ramp from a moving airship to the tip of the tallest building in the world, even in excellent conditions, beggars belief.” (Christopher Gray, New York Times, Sept. 23, 2010). The gallery exhibition features an impressive image of the dirigible Los Angeles docked at the tip of the Empire State Building (1931), but this scene did not come to pass, and is in fact a composite photograph. The tower would ultimately be used for radio and television broadcasting.

A day of note in the building’s early history is July 28th, 1945, when an aircraft collided with the 78th floor, resulting in a four-alarm fire and fourteen deaths. The U.S. Army B-25 bomber was en route to Newark, New Jersey when the pilot was disoriented by dense fog conditions. A group of five photographs show a street view of the smoking building, the plane wreckage, and spectator reactions to the crash – the latter captured by infamous street photographer Weegee.

A mere two years after its unveiling, the building was featured in its first of many films: King Kong (1933), sealing its position as a cultural monument. In 1964, Andy Warhol set his lens on the structure to create an eight-hour slow motion silent film. Shot facing southeast from the 41st floor of the Time-Life Building, the film simply documents a fixed view of the Empire State from 8:06PM to 2:42AM the night of July 24–25, 1964. Due to its length and experimental nature, the film was met with mixed reviews.

As the most photographed building in the world (Cornell University, 2011), there are countless images of the Empire State Building’s recognizable façade. Selected exhibition photographs range from aerial surveys to street views, distorted reflections to detailed studies, and news photographs to artistic compositions, capturing the seminal building from every perspective.