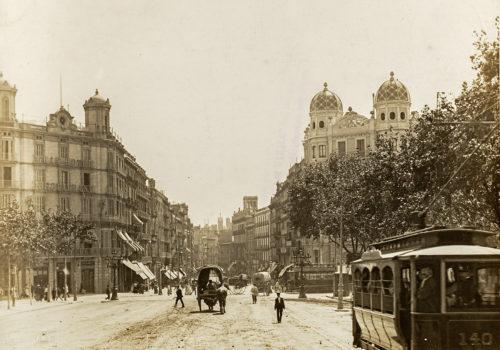 The photographs by Adolf Mas portray Barcelona in the midst of a socio-cultural, artistic, political, and urban transformation. The graphic narrative constructed by the photographer allows us to explore a reality that was rapidly changing, and understanding his photographic legacy is fundamental for the correct interpretation of the dynamics linked to early 20th- century Barcelona.

Adolf Mas is mainly known for the creation and consolidation of the renowned Mas Archive and for being one of the first heritage photographers in Catalonia. However, he is also a more complex photographer. His beginnings as a photojournalist ran in parallel with something akin to artistic photography, which became aparent in his portraits. These were not traditional, and brought his work closer to the artistic circles of the time. Although Mas’s production cannot be included in the movement known as pictorialism, it undoubtedly goes beyond what was being done in other contemporary photographic studios, and it is an aspect of his work that this exhibition highlights.

Over the years, many national and international exhibitions covering a wide range of topics have included works by Adolf Mas and other photographers. However, Adolf Mas. The Eyes of Barcelona is a monographic project that aims to present him in the round, as a photographer and as manager of one of the most important photographic archives in Spain.”

Born in Solsona (Lleida) on September 28th, 1860, Adolf Mas moved to Barcelona prior to 1890. He left his hometown and his work as a solicitor for an uncertain future in the Condal city, initially making his way in the textile industry. A few years later, he became a regular at the Els Quatre Gats café where he established contacts with the intellectuals and artists of the day. In 1901, after training as a photographer, he founded his first business selling photographic materials, a business that years later would become the “Estudi de Fotografía A. Mas” [the A. Mas Studio of Photography], the predecessor of the “Mas Archive.”

Mas became the main photographer for architects such as Josep Puig i Cadafalch, who commissioned him to photograph his buildings, as if he were compiling an inventory. He also produced a repertoire of other images, of which those of the Sagrada Familia stand out.

A pioneer of photojournalism in Catalonia, he documented a wide range of cultural and current events, as well as the new infrastructures and healthcare initiatives that were flourishing in Barcelona in the early 20th century. His commissioned portraits produced for illustrated magazines are an extraordinary testimony of the intellectual circles of the time.

From 1910 his production was centered on compiling a registry of artistic and monumental heritage, and in 1915 he received a commission to produce an iconographic repertoire of Spain. From this time on his work would focus on the administration of an impressive archival resource which was intended for public consultation; by 1936, the year of his death, it consisted of approximately 100,000 negatives.