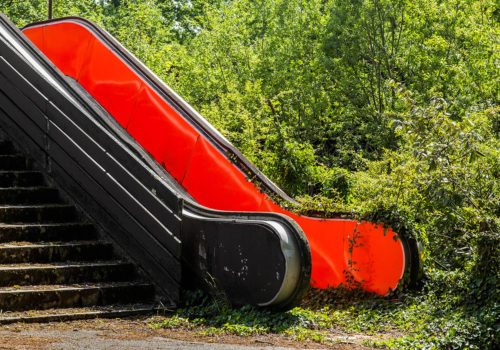 “Nature is the strongest … Whatever happens to Man, it will always be there.” This is essentially the message delivered by photographer Jonk in his book Naturalia II, a new opus from his Chronicle of Contemporary Ruins.

True to his obsession, this extraordinary artist continued to travel the world in search of abandoned places, out of time.

He points out: “Today I visited more than 1,500, in some 50 countries on four continents. Over time, my interest has focused on what strikes me as strongest in this vast subject of abandonment: places reclaimed by nature. This theme naturally emerged from the ecological awareness that drives me since my youngest age and the strength of the message it carries: the question of man’s place on Earth, and his relationship with nature. . “

Three years after Naturalia, he presents here 221 photos taken in 17 countries. Each shot diffuses a strange poetry, like an invitation to meditate on the passing of time and on the ephemeral creations of Man.

The impact of Man on his environment has never been so strong … Man builds, Man gives up. Each time for reasons of its own. Nature does not care about these reasons. One thing is certain, when the Man leaves, it comes back and takes everything back.

Over the past three years, Jonk has seen significant ecological changes.

First, it is clear that the situation has deteriorated, with species disappearing every day. Global warming continues and leads to repeated natural disasters: floods, fires, droughts, etc.

Then, what is more positive, the collective consciousness has largely awakened. The photographer therefore remains hopeful for the future. He specifies :

“We’re still a long way from the commitment needed to really make things happen, but they are clearly moving in the right direction. Millions of positive and unifying initiatives are emerging. I hope my photos and the accompanying message add a little stone to the edifice.”

Jonk’s pictures surprise, challenge, question. We find ourselves imagining the story behind the image, wondering about the causes that made the men leave who left everything behind. We admire, almost in spite of ourselves, the force of Nature, which always returns to take its place.

In March 2018, Jonk released the book Naturalia which brought together his first photos on the subject. His singular approach was immediately noticed. The historian and archaeologist Alain Schnapp, author of numerous books on the theme of ruins and former director of the National Institute for the History of Art, notably signs his preface.

He writes: “Between nature and culture, Jonk’s photographic work is in a way the extension of this dual vision of ruins. On the one hand, the interpretation of the ruins as a social fact and on the other hand, an artistic vision that favors an almost organic approach.

His camera lens, through the soft-colored photographs, takes us on a journey through tall architectural structures often completely overrun with stray weeds, huge crumbling concrete or steel shells, as well as vehicles, cars, planes and tanks.

All these images are marked by signs of decrepitude, aging or decay. The ruins, he seems to tell us, are only one step in the process, followed later by piles of rubble, and further afield, nothing more than traces or remnants of what was before.”

Through this series and with his modest means as a photographer, Jonk speaks a universal language and tries to meet the ecological challenge that presents itself to each of us. He wants to show the traces of the passage of Men differently to invite reflection on the role that we all have to play on this Earth.

Today, three years after the release of the first volume, he finally delivers a sequel to his exploration of all these abandoned places.

220 photos with caption taken in 17 countries