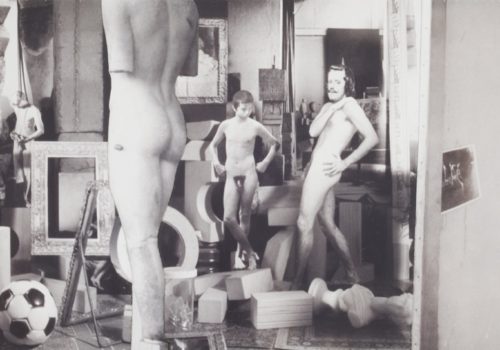 The Worcester Art Museum presents a major and fascinating retrospective of the American photographer John O’Reilly, whose photomontages mix contemporary and historical images to frame new insights into human interactions and the human form. A Studio Odyssey, on view from May 13th through August 13th, 2017, covers the artistic range of O’Reilly’s 50-year career and examines the evolution of his creative process.

John O’Reilly is best known for self-portrait photomontages that use Polaroid photographs and mix images of himself with fragments of photos of works by other artists. Confronting both personal and world history, he draws on his vast knowledge of art, literature, and music history—including the French writer Jean Genet, American novelist Henry James, and Greek poet Constantine Cavafy—to explore the ideas of transgression, subjectivity and isolation, and the relationship between time and memory.

O’Reilly’s work also delves into issues of homosexuality, both as an aspect of his own identity and as an often-repressed, complicated narrative within society. More recently, he has incorporated found coloring books into his art, reconnecting with his World War II childhood and exploring his own feelings about mortality. More informal in construction, but no less complex, the resulting collages simultaneously communicate innocence and anxiety, a reflection of O’Reilly’s conflicted feelings during his youth.

Curated by Nancy Kathryn Burns, the Museum’s Assistant Curator of Prints, Drawings, and Photographs, A Studio Odyssey features 85 of O’Reilly’s works—including over 20 created since 2000. “The exhibition seeks to provide a visual narrative illustrating the major literary sources that affected John in his development as an artist. In addition to the rich art historical references in his photomontages, the artist often returns to literature as a foundation for his production,” said Ms. Burns. “The ‘studio odyssey’ we’ve created, is a journey through the subjective world of John’s creative process.”